Be a Ghost-Ball-Buster this Halloween

Try being an IRL (In Real Life) Ghost to someone you know who likes to just disappear on the perfectly nice people they’re dating! Literally. Just wear whatever you have on, then in the middle of a date or convo, tell the other person you are going to “ghost” on them and hide somewhere! Under a table, in a closet, behind a dumpster – you pick! Total fail right? Because ghosting in person is impossible, therefore it’s the way to go, people.

Look, I get it. Ghosting is great for a fast exit from an awkward situation – like being able to float through walls and shit. Ghosting is scary for people putting themselves out there because they question their own perceptions of what is real and what is not. For example, did he actually say, “I really love hanging out with you!” or “It’s really nice to connect with someone.” Or could I be hearing voices? Was he even an actual person? Was he dead the whole time?

So join the pack of real-life Ghost-Ball-Busters this Halloween and call out anyone you know who doesn’t think they owe a goodbye to someone they’ve seen topless.

You’re still with me?  Great. Let me arm you with some talking points.  First of all, a lot of ghosters don’t even realize they’re ghosting.  Or they know, and they’re in denial because even they know how cruel it can be.  So you’ve got to help them see the whole picture of their invisible selves. Let’s review the two main reasons I hear people claim as reasons they ghost.

1. I didn’t want to hurt the other person’s feelings.

via GIPHY
Translation: I didn’t want to feel bad about myself while hurting the other person’s feelings.

That’s like saying “I backed into your car but didn’t want to leave a note because I felt bad.” The damage is inevitable but the note at least scores a point for common decency, whereas, the lack of one strikes a blow. If you don’t leave a note, that’s basically a hit-and-run which, by definition in the land of casual dating, is ghosting!

Here is the deal: we are wired for empathy during a face-to-face convo with a person, not sterile texts or even over the phone- empathy being a good thing and something that makes us decent humans. It means that breaking up with someone will feel a little bad at the time but it’s much better in the long run. That goes for both parties. Do you want to have to stay invisible when you see the person you dumped at a party, or be able to say, “Hi, how ya been?”

The second reason, crazy as it may sound, is that they wanted to leave the door open for a possible reappearance. By leaving their departure vague, their reentry is possible. Apparently, it works! When someone dies and then magically appears again that’s pretty exciting for the living. Honestly, that person who is excited to answer their ghoster’s long-awaited text message basically has a version of Stockholm Syndrome.

It’s no longer about the genuine attraction they have to the ghoster, but the validation they’ve been previously denied by them. They just want to escape the feeling of being completely disposable- a feeling they ’re subjected to when someone ghosts on them.

It’s human nature for many of us to fill a void of information only with negative information about ourselves. But there’s little reason to suggest that the ghoster thinks of you that way. Dating is tough and rejection is inevitable. So tell your ghoster, if their main goal is damage control, they should at least leave a note or – better yet – deliver the rough news in person.

For the rest of the year, promote the “do it in person or not at all” approach to any and all electronic rejection or harassment. Spread the gospel of:

If I said or did this in person, would everyone around me feel like they need a shower or a meeting with HR?

Ghosting is starting to feel contagious among Millennials and Generation Z. Technology is connecting us more than ever before, but it’s also aiding and abetting a lot of the damage we do to each other—much of which is never intended. I think the same can be true for the opposite. Convincing people to give a little more thought to how they deliver bad news to a friend or lover could go a long way for all of us and make communication/relationships a lot less scary and—in the end—a lot more “ghost free.”

Early on when I was dating, I got dumped by some brave souls who had the maturity, nerve, and compassion to say it to my face. I am so grateful for them—because of that, I will never ghost someone even though others have done it to me. I understand the difference it can make in those tough moments. So, if nothing else, remind the ghosts in your life that what goes around comes around. Try to be a better person before you have to learn the hard way, now or in the afterlife.

About the Author: amyk 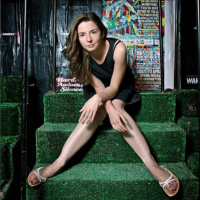 Amy is a comedic actor, writer and producer. She began developing indie web series in 2009 and has since produced 6 shows, a narrative short film and the 50 Video launch of Lady Parts Justice, created and run by Daily Show creator Lizz Winstead.  Amy works part-time as a freelance producer/editor guiding new female producers and directors through their first projects. Her work has been featured on the Huffington Post, MSNBC, Upworthy, Glamor. com, WhoHaHa and Hello Giggles. Since moving to LA in 2016, Amy has worked on three studio features in various roles: Sandy Wexler (Netflix) The Week Of (Netflix) and The Spy Who Dumped Me (Lionsgate).