9 Ways to Break Up with a Hookup

I am (mostly) past the Stranger Danger hook-up phase in my life.  At one point in the past, I was a serial slut, and every night out was a conquest expedition. The two best things that come from that lifestyle are:

Some ladies prefer to break things off via text message. I’ve done it (as recently as last month). I’m not proud, and it certainly won’t go down as my most courageous moment… but it works. So there. Texting avoids any face-to-face confrontations, and you can simply stop responding after you have dismounted your soapbox. Sure it’s passive but he was a hook-up, not your husband. If I had to guess, this is the most frequently used option for calling it quits. Especially if it was the mode of transportation for the majority of your previous communications.

This method takes more willpower than I can usually muster up. I’m not really the silent type, as my favorite weapons are my words. Sometimes ignoring the problem does make it go away. If he’s smart, he’ll take the hint. However if he’s really stuck on you, be prepared to hear from him for the unforeseeable future. And if he’s really a clinger, he may show up at your normal watering holes or even your house. Weigh the risks carefully.

Similar to the text but a tad more personal.  It’s still cowardly, even if it is tangible. Made famous by Berger and his post-it note in a Sex and the City episode, I don’t suggest this method… Carrie wouldn’t approve. I think the only people that get a pass to take this route are wordsmiths, or the painfully shy. If you can write out a respectable letter, I think you should. Sometimes I’m better on paper too.

Sitting there, in the flesh, is not easy and it could get heated or sappy. He’ll have more opportunities to debate your decision and try to change your mind.  Plus, if you’ve been hooking up with him long enough that there are feelings involved, odds are he knows how to change your mind. This method is respectable and old fashioned. I think if you chose this avenue you could add “dissolution of contracts in high stress situations” to your resume.

Sometimes these decisions are made in the heat of the moment, and they just can’t wait until your clothes are back on. Maybe that new move he tried snapped you out of your blinders, but whatever it was you have to tell him – NOW. You did just give him an orgasm, so maybe his brain isn’t fully functioning. He might not realize that was his last horizontal mambo with you until you’re already long gone. This is about to be a Stride of Pride you’ll never forget and I’m going to nominate you for Slut of the Week.

If you think he’s prone to throwing tantrums or being clingy, try to have the talk in public. He’s less likely to make a scene or come chasing after you crying out your name like some Harlequin Romance drama king. Plus it puts you in a neutral zone where neither side has an advantage, and potentially the most mature way to handle the situation.

Let him see you with someone else. You know where he hangs out; it shouldn’t be too hard to accidentally bump into him. Or take this matter to your social media sites. Subtweet about some hottie, or post ambiguous shots of you and a male friend on Instagram with misleading hashtags. I don’t advise putting anything on Facebook though, lord knows you don’t need your family or estranged high school pals involved.

I don’t know anyone that’s used a friend to deliver the news since middle school, but maybe you wanna bring it back into rotation. You could even consider it your Throwback Thursday contribution. However, if you’re looking to make an Eskimo Sister this might evolve into the best idea you’ve ever had!

If you’re not afraid of a potential hit to your reputation, this option is totally for you! Fake an illness, perhaps a suspicious rash? Tell him you forgot to mention your illegitimate children and your baby daddy that’s soon to be released from prison. Maybe you have religious differences and your snake shaking preacher wouldn’t approve. Hire a skywriter or one of those kids that spins the signs around in front of businesses. This is your opportunity to get creative!

No matter how you decide to part ways, I don’t envy your situation. It’s never easy to disappoint someone and you’re always going to feel like a jerk. Make it as quick and painless as possible!

About the Author: Georgia Devereaux 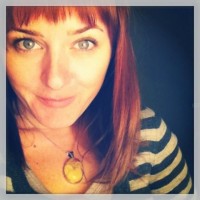 Georgia is a southern girl, trained in the proper etiquette for all social situations. (Even if she rarely exercises the rules) There’s a wicked truth to the cliche that a southern woman can tell you to go to hell in such a way that you’ll look forward to the trip! She savors every party invite and gathering that gives exposure to her inappropriate humor and behavior laced with sarcasm and wit. She’ll charm the pants right off the host, twice, and never smudge her lipstick. You can find her anecdotes here and follow her on twitter using @GADevereaux