Before you watch the video below, take a minute to think about all the things you’ve said sorry for in the last couple of days (or even hours) that really did not warrant a true apology. It’s a lot now that you think about it, isn’t it? Although the video below is clearly an add, we were psyched that Pantene put out something thought-provoking. It got us thinking about why women always apologize, what we apologize for, and how we can start viewing the world in a new way so that we don’t feel “sorry” about almost everything that’s a slight inconvenience for someone else.

The video is spot on, isn’t it?

Why do we feel the need to apologize – constantly – for things that don’t require an apology?

According to multiple experts, there’s a societal trend of women apologizing way too much – and you’re probably (unknowingly) participating in it. This trend comes from women’s societal conditioning, where we are taught to please everyone (or face consequences). We apologize to help that image stay alive, and of course, to reduce and perceived consequences that come our way.

So why do we say sorry that much? Experts say it’s because women are taught to please other people from a young age. Rachel Simmons, author of “The Curse of The Good Girl”, states that women are taught that they have to be likable to get ahead, and that apologizing is good tool to being liked. Simmons isn’t condoning this; she’s simply stating that it’s part of our society. Women’s societal role is expected to be sweet, soft, and kind – even after we’ve fought hard for the right to be whatever we want. (Time.Com)

“Sorry is a ritualized form meaning something like, ‘I hope this is O.K. with you,” Says Robin Lakoff of UC Berkley. Sorry is a womans way of saying, “I’m not completely conforming to society’s defintion of how I should act right now, and I know that. I really hope it’s okay!”, especially in the professional world. In an overarching sense, women apologize for existing in any way other than how they were taught they should. (Time)

Do women say sorry more than men? Psychological Science Journal found that women and men both apologize the same percent of the time when they feel they’ve made an offense – but, women consider MANY more of their actions to be offensive. CNN) The examples in the Pantene videos include a mom saying sorry for handing her child to her partner, a woman who apologizes for talking at the same time as a man and then letting him go first, and a woman apologizing for asking a clarifying question in a professional setting. All these examples are perfectly acceptable things to not be sorry for. A mom asking her partner for help? Parenting is a two person deal. Accidentally starting a sentence at the same time? How was she to know he was going to talk too? Finally, the woman in the professional scene has absolutely no reason to be sorry at all. She’s asking a clarifying question so that she can do her job. That is, in no way, wrong. 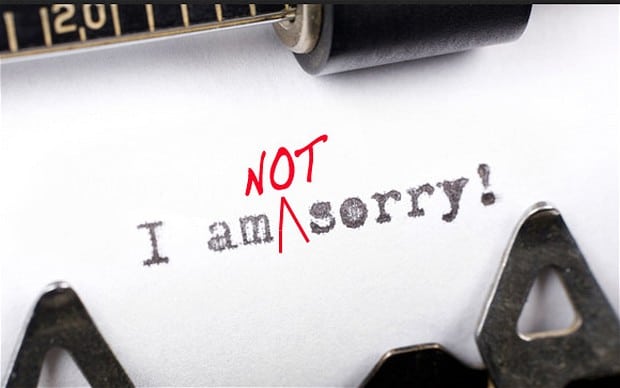 This over-sorrying infiltrates everything in women’s lives: romance, professionalism, and domestic life to name a few. So, when I saw Pantene’s new ad before a YouTube video, I was ecstatic that someone was making a statement – and was refusing to buy in to our social conditioning any longer. As I watched the ad, I realized how detrimental being apologetic can be – especially in your professional life.

The ad brought a nugget of wisdom into my head. Although the quote isn’t exact, the gist is, “A lady never should never say she’s sorry unless she truly is. If she bumps into someone, she should simply say “Pardon Me” and move on.” If you’d like the exact quote, the book is “As a Lady Would Say” by Sheryl Shade.

I decided to work on kicking the habit before I get into the career world. So, in preparation for this article and my future, I tried not saying sorry – and I realized how much I really say it when I don’t mean it. As a hostess at a restaurant, I have to squeeze by tables and dart in and out of crowds. When I replaced “sorry” with “excuse me” or “pardon me”, I actually got a much better reaction. I had feared that not saying sorry was going to be rude – but in reality, it wasn’t. The fear was quieted and I felt much more professional, too.

I’m doing my job, why should I apologize?!

I persued the internet chat rooms and Twitter asking women, “What’s the dumbest thing you’ve said sorry for in the last week?”

Here’s what I heard:

For me, I realized how #notsorry I was when I caught myself apologizing to a guy I’d never met on Tinder for gaining weight. I recovered from a seven year eating disorder and I actually am comfortable at my body for the first time in my life. Why the fuck would I apologize for that? So I didn’t. If he can’t handle my curves, sex with me is not what someone like that deserves.