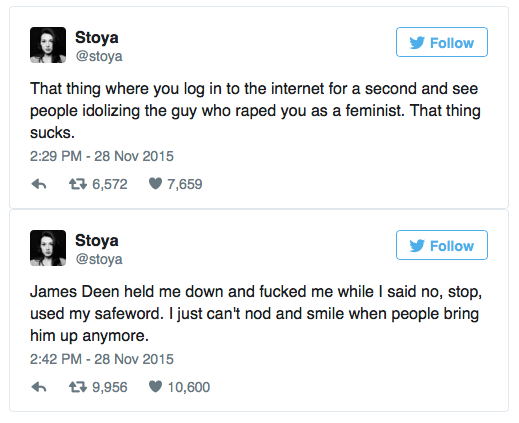 “When James Deen is ‘working’ he is the physical embodiment of consent culture. He is the most attentive partner a teenage girl is likely to see in this world. In most of his videos, this is visible in his continuing to do whatever fabulous thing he’s doing at his lady’s enthusiastic-consent-eyes/breathing/nod/whatever, but you always get the feeling that if she winced for just a moment he would stop the action no matter what the director said.” 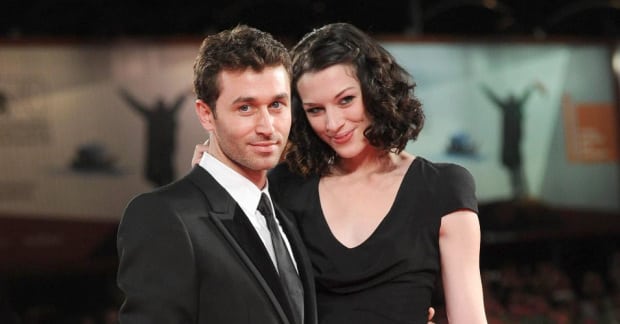 Despite James Deen’s supposed passion for consent, Stoya’s recent statements paint a new, negative picture of Deen. Unfortunately, since her tweets have been published, rape apologists have come out of the woodwork, de-legitimizing Stoya’s claims for various reasons – ranging from anything from a lack of proof to disgusting comments insinuating that because Stoya is a porn star, she cannot be raped. As many rape and sexual assault victims know, victim-blaming and lack of belief is far too common. Victims face even more disbelief when the perpetrator is well known or believed to be a “good guy”. Yet, this does not make the accusations any less true. 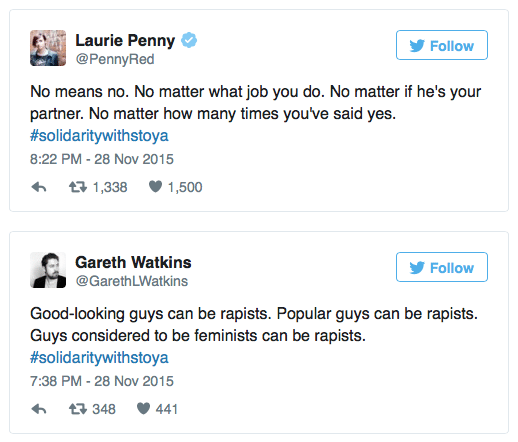 As sex worker and feminist Margaret Corvid wrote in her open letter to Deen on Sunday, James’s “behavior strengthens the voices of those who would criminalize every form of sex work.” Deen’s rape of Stoya (and, according to other adult film stars who have now come forward, the assaults of at least two others) adds fuel to the anti-porn fire held by many conservatives.

In the past, myself and plenty of other feminists, including other writers on this website, have exclaimed over how amazing we believed James Deen to be. In light of these recent accusations, I can’t help but feel disappointed, hurt, and angry – and also extremely compassionate for Stoya and others affected by James Deen’s actions. No rapist can make up for their crimes, but Corvid writes an excellent suggestion to Deen. If he truly considers himself to be a good man who believes in consent, she suggests that he step down, turn himself in, and give his profits and royalties “to Planned Parenthood and rape crisis centers.”

Since Stoya’s tweets, Deen has denied the accusations. As a feminist and as a victim myself, it is impossible for me not to #StandWithStoya. Whether Deen continues to defend himself or attempts to do something to make this situation better, we have yet to see. For now, I can only feel empowered that Stoya and others were so brave to share their stories with the world.