How old are most girls when we first realize that we can turn off safe search? What about when we’re first told that our virginity makes us special? Girls’ teenage discoveries of online pornography tend to coincide with puberty and the first pressures to keep themselves pure. This dangerous combination makes it near impossible for teenage girls to develop a healthy sex life.

The Problem With Slut Shaming

Slut shaming is often aimed at girls and women who enjoy an active sex life. Women are told that having too many partners or enjoying sex too much is a shameful thing. Therefore, it is difficult to have a public discussion or pass on advice about sex without being negatively labelled as a slut. By saying that a woman who is knowledgeable about sex is also immoral, slut shaming makes it difficult for women to pass on honest advice about their sexual experiences.

Slut shaming also puts unhealthy pressure on girls who are beginning to learn about sex. Even admitting that you watch porn can be considered scandalous for a girl. If a young girl is beginning to think about her own experiences with sex, she is quickly met with a barrage of social commentary, telling her not to sleep around or to enjoy sex too much. Women who have a full sex life are described as dirty or emotionally damaged. This narrative is present in many sex education programs, especially those that focus on abstinence. In these programs women who have had sex are compared to pieces of chewed up gum. This can have a serious emotional effect on a young girl who has no access to honest conversations about female sexual pleasure. 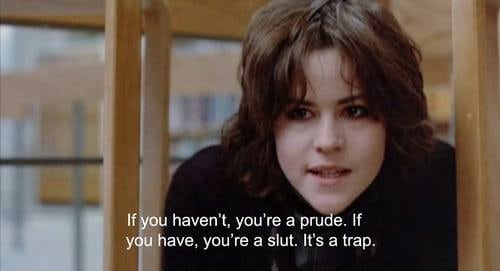 The Solution in Sex Education

According to the Guttmacher Institute, only twenty-two states and the District of Columbia mandated sex education in 2015. In over half the country, schools are able to skip educating their students on any sort of sexually transmitted diseases or safe sex practices. In the states that do provide sex education, it is often incomplete, dishonest, or both.

Providing sex education that honestly addresses the fact that teenagers have sex opens the door to complete and effective education. By avoiding abstinence only programs, teenagers can be taught about how to use various methods of birth control and protect themselves from STIs. Sex positive education should also include discussions of consent, ensuring that teenagers understand how to communicate with their partners. This helps spread awareness of the importance of affirmative consent, instead of just the absence of the word “no.” An open discussion of sex removes the stigma present in a slut-shaming culture and depicts sex as something normal and healthy as long as everything is safe and consensual.