What His Tattoos Say About His Personality

I love tattoos (what slut doesn’t?), and have always been attracted to guys with ink (hello Colin Kaepernick and David Beckham!) Tattoos are a great way for guys and girls alike to express themselves, and the types of tattoos can say a lot about the person wearing them. Have you recently started dating a guy with some radical ink you can’t comprehend? Or have a crush on a guy with a pin-up or celeb tattooed on his forearm? I can let you in on some common trends and personality types I’ve put together, to help you figure out what that tattooed hottie you’ve been eyeing is really all about. Here’s my interpretation… 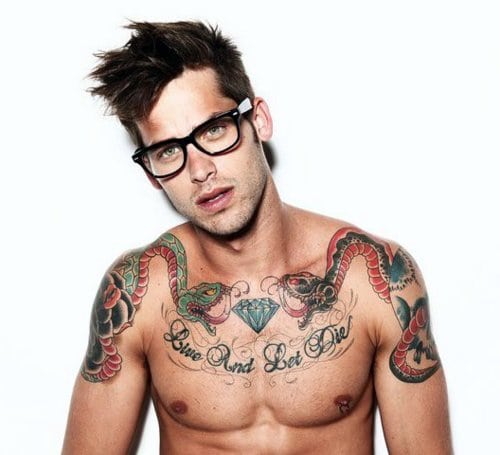 Unless he is actually part of a tribe or from somewhere in Asia, chances are that a dude with a tribal and/or Chinese symbol tattoo got it during the 90’s when those things were all the rage. This also means he probably just hopped on the trend band-wagon.

If you ask him about the tattoo(s) and he is embarrassed or ashamed, then it could signal that he’s living with regret. Hopefully he learned a lesson from it, and isn’t still in his YOLO-esque phase. Bonus points if he can laugh about it, and is comfortable enough in his own skin to write it off as a memento of the past, instead of getting defensive when asked.

Tribals are particularly difficult to cover up, so they are a quite unfortunate reminder of a silly white boy fad (I’m looking at you Nick Lachey!). If he’s anything like the former boy band singer – then he’s still hot, tattoo or not. (Albeit, he might be a bit of an ass if Newlyweds: Nick & Jessica taught me anything.) 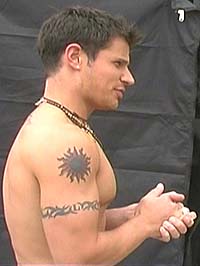 This guy is either deep, or wants the world to think he is. He may be well read, or perhaps a quote someone he cares about said really stuck with him. If he has a Bible verse tattoo, it doesn’t necessarily mean he’s even the least bit religious, so don’t assume as much. He could have just found the quote empowering and inspirational, especially when he was going through a hard time. It will be easy to tell which kind of guy he is by asking what the inspiration for his tattoo was. He’s either going to give you a long drawn out philosophical answer, or say something like “Just some shit my dad says.” 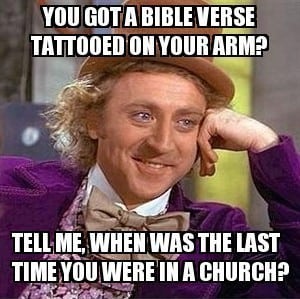 I don’t care what kind of animal it is – bear, dragon, lion, owl – if a guy is sporting it, it’s usually because he wants to embody that animal or because it represents him or a loved one in some way. Or maybe he just really likes tigers, or thinks it will make him look cool. Either way, on a subconscious level, he’s projecting the spirit of that animal, so you might look into the character traits of that animal to gain hidden insight into him. Star sign tattoos such as a Leo or Pisces can either be trendy, or a way for him to try to connect with and understand himself better. Take a look into that sign’s personality traits to see what he thinks he embodies. 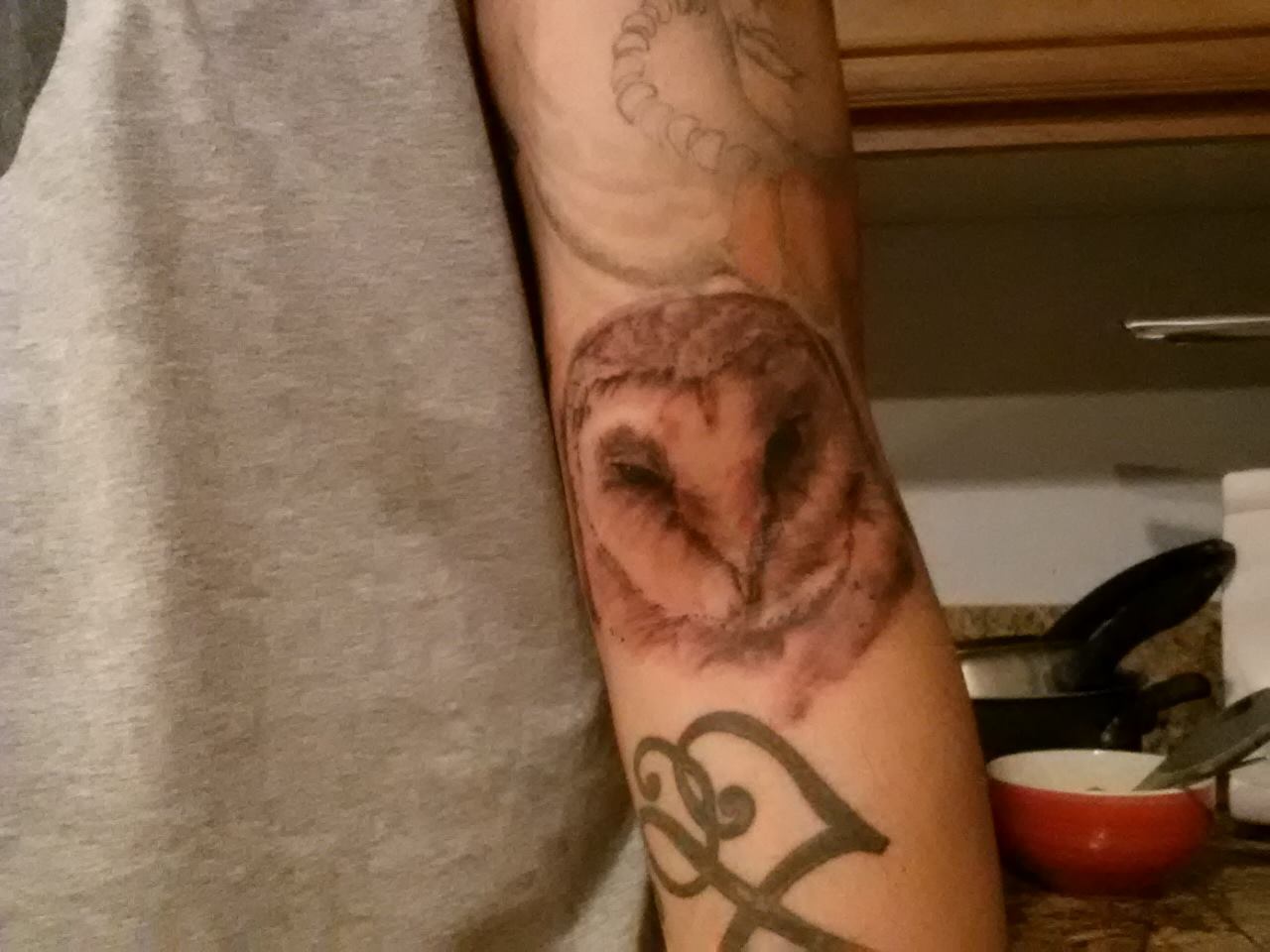 A lot of traditional tattoos favored by the likes of bikers contain skulls and/or wings. He may think this will make him look cool a la Jax Teller, and it may just be flash. Chances are, he’s trying to embrace the bad boy image, but many “bad boys” are really sweet and harmless mama’s boys at their core. 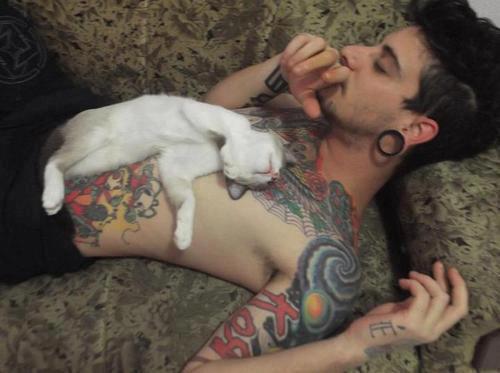 In general, if a guy has a cartoon character tattoo, you can assume he’s got a fun side OR is immature and doesn’t want to grow up. If it’s a childhood favorite, it may be a nostalgic thing. If it’s a superhero, then he may still secretly wish he had superpowers.

For classic famous people tattoos like Marilyn Monroe or James Dean, he may feel like he was born in the wrong decade, or just want to embrace some of that old Hollywood glamour. If it’s an off-the-wall D-list celebrity tattoo like Carrot Top, then I’d say run unless he’s got a realllllly good story behind it. 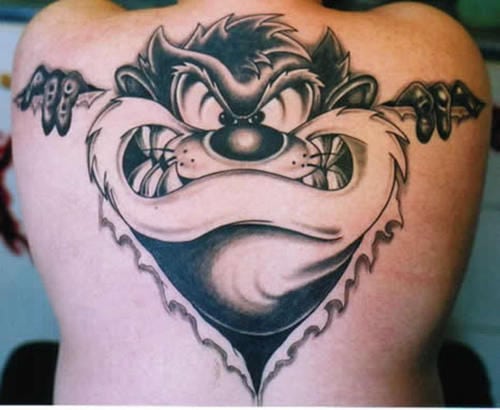 Pin Up or Sexy Woman

If it’s a classy pin up, then he may respect a full figured woman. He’s likely a man who appreciates beauty and will treat you well. He’ll certainly find you more attractive than Kate Moss. But beware, he may have a wondering eye.

Memorial tattoos typically signify a sentimental guy who wants to pay tribute to those he has loved and lost. It can be very sweet, unless he is weirdly obsessed with the person and can’t move past his grief. Memorial tattoos are popular among military who have unfortunately lost more friends than the average American. If he’s got the name or likeness of someone who is still with us, then he likely loves that person very much, which is great so long as it’s not an ex-girlfriend! 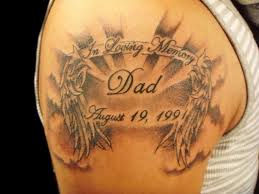 If a guy has a random image on him like a sword or ship that looks generic, and when asked why he got it remarks something along the lines of “I just liked it”, then you can bet he most likely just walked into a tattoo parlor one day and picked a piece of flash off the wall. This could indicate a guy who doesn’t put much thought or effort into things when he really should. But if you like a spontaneous and carefree guy who doesn’t overthink things, that might not be such a bad thing.

I would hope that this goes without saying, but if the guy has a prison teardrop tattoo or something racist like a swastika, he’s got issues and you deserve better. 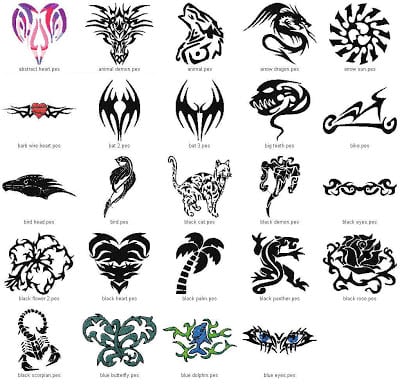 What kinds of tattoos does your guy have? Which tattooed celebrities make you drool? Share in the comments!