4 Things You Have That Barbie Doesn’t

We grew up with Barbies and Cindys which told us “this is the perfect woman”. When someone wants to look like them though, all of a sudden it’s mocked and treated with a grim humor, where the person in question is made a laughing stock. We often grow up conditioned to think that we should be beautiful and popular like the dolls we are brainwashed to buy. Then we are humiliated, by the very people who promoted the ideals we grew to compare ourselves to, when we start to feel insecure about our natural appearance, and want to change to something more… manufactured.

I remember one day when my mom took my older sister, two younger brothers, and I to the toy shop. I saw this amazing tea set with mini teaspoons, sugar pot, milk jug, teapot – and it was AMAZING. Myself and Harry Potter (my guinea pig) had many a good time. But, on the same day I chose my tea set, my sister had chosen a MyScene doll (a mixture between a Bratz doll and a Barbie it seemed). Of course I instantly regretted not choosing a hot stuff MyScene doll, and I asked my sister if she wanted to swap but alas, she didn’t want to serve invisible tea to Harry Potter, which kinda sucked. I wanted the doll… because it was beautiful. 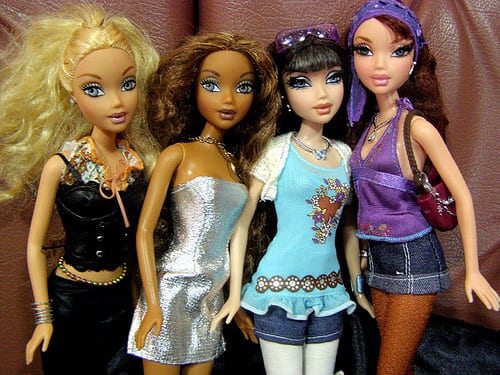 We are brainwashed from a young age to believe that “beauty” is what we are bombarded with by a misogynistic, racist, patriarchy-controlled media. Because of this indoctrination, we are unable to recognize beauty as anything else. In reality, beauty is just word to describe a concept that mutates to an individual’s ideal. Using beauty only to define a certain ideal is absolutely ridiculous when you look at the bigger picture. As women, we have heavy and impossible expectations of appearance to strive for. Blue eyes, big boobs, small waist, round butt – but who are we doing this for? Certainly, not for ourselves.

“When you look at yourself in the mirror in the morning, do you see yourself through your own eyes, or through the eyes of the men that will look at you when you walk out the door?”

– from “A Response to Women Against Feminism“

I’d like to go out without having to put on make-up. I would love to be able to make the trip to the supermarket with my hair greasy and in the clothes I’ve been wearing all week (if they don’t look dirty, they ain’t), but I don’t. Why? Because people will think I’m a goblin; or even worse, they’ll say I look like my mom.

When we think about conforming, we need to start to ask ourselves ‘why?’ If you want to look a certain way today, why is that? I know that when I put on a pair of patterned TOPSHOP treggings, I’m thinking about how good my butt looks (it looks awesome). I like feeling good about my body. However, if a man vocally expressed the fact my butt looked good, he wouldn’t get off without an injury. So, without judging or shaming or condemning anyone, I just like to ask, why?

We’ve all seen those people that have had every surgical procedure possible to look like dolls. I’ve also seen a documentary about men being able to buy specially made women’s masks so that they can embody their perfect woman… to each to their own. But, not looking like – and being like – a doll is actually fantastic. Remember, you are 100x better than any Barbie out there – or any doll, for that matter.

Things You (Probably) Have, That Barbie Doesn’t:

I was going to write real boobs, but not everyone’s are as real as others – and there is nothing wrong with that. I have thought of breast enlargement before, until I found this amazing bra. When I wore it, I was asked if my boobs were real! I was so entertained by this that I didn’t even punch the cheeky assholes who asked. Anyway, what you probably have that Barbie definitely doesn’t are nipples. Nipples are fantastic. For some of us, they stimulate our sexual appetite; for some others they tickle a bit and it is endless fun lying in bed playing with them… or maybe that’s just me, but I bet Barbie couldn’t do that! Also, we can get our nipples pierced and Barbie cannot do that. Awesome.

I know that most of us checked our Barbies at some point to see if she possessed a vagina, penis, or some other form of genitalia to innocently laugh about. As we all discovered, Barbie does not have a vagina. There isn’t a clitoris, no labia, and no opening. So what would possess you to envy Barbie? She’s sworn to chastity for her whole doll life! (I gotta admit though, after watching Sister Act I did have ambitions to become a nun; just like I aspired to be a lawyer after watching Legally Blonde…) Vaginas though: Barbie may have a ‘perfect’ match with Ken, but unfortunately neither of them will experience each other sexually. That isn’t very exciting.  So yes, vaginas are very special.

After a long day/night of looking fabulous wearing the newest shade of Rihanna lipstick and your overpriced foundation claiming to last for 24 hours (it only lasted for one before sweating off), you can go home and enjoy the feel of a baby wipe on your face. One of the best feelings I experience on a weekly basis is wiping off the inches of makeup I put on and having a totally naked face. A face so plain Jane Eyre would be envious. Barbie’s makeup is a permanent nightmare. There isn’t any way of taking any of it off, and let’s be honest, would you want to always be wearing pink lipstick? I suppose a few of you may… but you have the opportunity to experiment with your makeup and wipe it all off later. How’s that?! 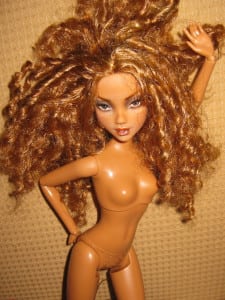 My favorite thing to have that Barbie doesn’t is a brain. Some of you may think that’s stupid because of course Barbie doesn’t have a brain, but if you’ve seen Tyra Banks in Life-Size, you understand that a doll can definitely feel emotions. It must be quite horrendous to have millions of others identical to you, everyone else making your decisions for you, and being completely fake. Doesn’t sound so ideal anymore, right? You have a brain, you make decisions, you have your own personality and autonomy. Barbie does not. 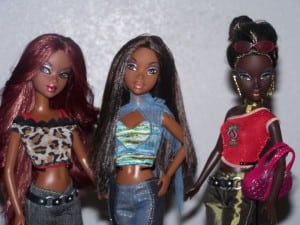 I’m glad to be real! Thanks, Slut!