A Beginner’s Guide to Identity Terminology

There are more labels and acronyms in our lexicon every day! But why do we have this ingrained desire to classify everything? As language develops, so too does the need to label, classify, justify… well… everything… For example:

Hi, I am Victoria, I am engaged, and I am an ally to the LGBTQI community.

While that identifies our gender and sexual preference, it doesn’t begin to delve into the options available and the requirement for people to offer specificity in all areas of their sexual lives. Whether you are cis-gendered, non-binary, straight, gay, bisexual, polyamorous, monogamous… people want to know the details and reasoning behind each classification.

Gender identity is not a new concept. In fact, it was coined mid 1960’s, but existed long before that. However, this definition only saw two options: masculine or feminine. Gender labels and identities are constantly shifting and are now defined as a person’s self-concept of their gender. Rather than simply a man or woman option, people might also be non-binary, gender fluid, or any number of other gender identities. Transgender refers to a person whose gender is not the one they were assigned to at birth. Cisgender refers to someone who does identify with the gender they were assigned when born. Transgender and cisgender people also identify as men, women, non-binary, or any of the other options discussed above.

Hi, I am Victoria, a female, I am engaged to a male, and I am an ally to the LGBTQI community. 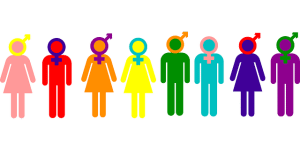 There’s a common misconception that gender and sexuality are the same concept, but this is not the case. Just because a person identifies as a woman, it does not guarantee that they also identify as being straight. Sexual orientation is the sexual attraction to a gender(s). Again, this began with heterosexual or homosexual, but continues to progress to include bisexual, asexual, pansexual… Each sexual preference is not determined by the gender identity of a person.

Romantic orientation refers to what type of romantic attraction someone feels. In many cases, a person’s sexual and romantic attraction will be the same or similar. Again, this is NOT always the case.  Someone might identify as bisexual, but hetero-romantic.

Hi, I am Victoria, a straight female, I am engaged to a straight male, and I am an ally to the LGBTQI community.

Do Not Judge My Sexuality By My Gender Identity

While I am not suggesting that I am trying on different sexualities for the “right fit” as Goldilocks did with porridge, I am demonstrating that gender and sexuality are their own unique concepts.

I could for example identity as:

This has actually been a constant challenge for me; most people assume I am a lipstick lesbian, because I am “too feminine” not to be. Which raises more labels; what’s a “lipstick lesbian” anyway?

More Names for the Same Rose

However, “types” like this can often be considered stereotypes by some individuals. So it’s not a good idea to use a label like this for someone else unless they’ve told you it is how they like to be referred to.

Identity is a unique process for each individual, and we now know that gender identity and sexual identity are more fluid than what was once believed. In fact, gender fluid is an option for one’s gender identity. However, the constant labelling and private information that is required when classifying ourselves is stifling! Rather than me simply being “Victoria”…

We don’t normally introduce ourselves with so many labels at once.  But it’s important to pay attention to how others identify themselves and understand what exactly those identities mean.