When My Guy “Friend” Slut Shamed Me

I thought I had found a friend in him. A new friendship with a nice guy. He was so sweet. When I was in between apartments, he offered his to me – even though he wasn’t in the city. He said he would mail me his keys. In a new city filled with unfamiliar faces, a new friend is always appreciated, especially one who is kind, too.

He knew I was a sex writer and seemed to be cool with it. I talk about sex openly, not only because I love talking about it, but mainly because I want to demystify talking about sex. It shouldn’t be this taboo thing we giggle with our girlfriends about. We should be able to talk about it openly and without guilt, judgement or shame – the same as you would talk about anything. This isn’t always as simple a task as I would’ve imagined. Talk about sex casually and men will most likely think you’re either a) hitting on them or b) will sleep with anyone. Women will most likely think a) you’re a slut or b) trying to sleep with their man. Not all men and women think this way, of course. But in my experience, many do.

My new guy friend seemed cool with it though. We would screen capture funny Tinder profiles to send to each other or pick Tinder dates and dare each other to go on them. We talked openly about sex, dating, and past relationships. Just as friends do. Friendship wise, this was going great.

Until of course the one time he tried to go home with me. I said, “No.” He sulked for a few days. We were both drunk, so I gave him a pass – because, alcohol. Then things got a little weird. Just a little bit at first, so I hardly noticed. He would throw in a sly phrase sometimes when I was going on a date – “Well, he gets your time.” But I didn’t think much of it. 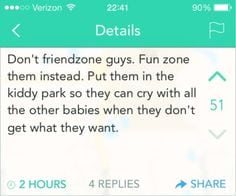 When Things Took a Turn

It was a quick glimpse into his psyche, and then it was gone. I should’ve taken notice, but he apologized, and I wanted to believe he was not “that guy.” He reined it in, and things went on as usual.

Of course it wouldn’t stay reined in for long! Later that week, he tried kissing me, and when I refused and firmly stated that we were just friends, he told me he didn’t believe me – because he felt something between us. Basically he wanted to bang me, and my not wanting it was getting in his way. I don’t know why the red flags waving, “Get out! Get out now!!” didn’t phase me. I didn’t want to hurt his feelings because of the past months of hanging out and the good times we had. He seemed mature, and if I could salvage the friendship, I wanted to.

A week later, we were planning to hang out that weekend. I had a party on Saturday and he wanted to go on a walk Sunday, something we did together quite often. Knowing I might end up hungover on Sunday, I told him, “I dunno about Sunday! Depends on how Saturday goes!” because if I were hungover, then I’d prefer to just eat lots of carbs and hibernate with Netflix. Who wouldn’t?

His response? “You’re such a slut! Not. lol”

This is when my brain finally clicked on. This man was slut shaming me because I didn’t want to sleep with him. He imagined me going to a party and fucking everyone but him – and that pissed him off, because somehow I owed him sex for being nice to me.

I stopped talking to him after that. He apologized, again and again. But even his apology was annoying. He thought he hurt my feelings. You didn’t hurt my feelings, fool! You overstepped your boundaries. You put on your Mr. Nice Guy mask and pretended to be a good friend, and when you didn’t get what you wanted, you thought you’d bring me down a peg or two by first passive aggressively trying to shame me, then outright calling me a slut before trying to brush it off as a joke.

No Shame in the Sex Game

I know what I do, and I choose to do it because I love what I do. I see no shame in liking sex and thinking that it is a normal part of life. Whether I want to have sex daily, all the time, with everyone, or not is no one’s business but my own. And I most certainly don’t need immature, passive aggressive man-boys trying to manipulate me to fuck them.

Basically, ladies, what I’m trying to say is: Don’t let assholes like these take away your shine. Be vigilant with people (both men and women) who will throw shade at you, overtly or covertly, because they’re not getting something they want out of you. They want to bend your will to suit their desires. Don’t let them. Go out and be free to fuck whoever you please! Amen. 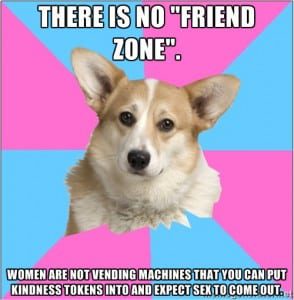