All About Tropes: The Beta Bitch

You might think that I’d continue our conversation about tropes with a discussion of villainous clique leaders like Regina George from Mean Girls. And while this trope is certainly problematic, and one I plan to touch on in the future, let’s skip the Alpha Bitch for now and roll to her sidekick: The Beta Bitch. 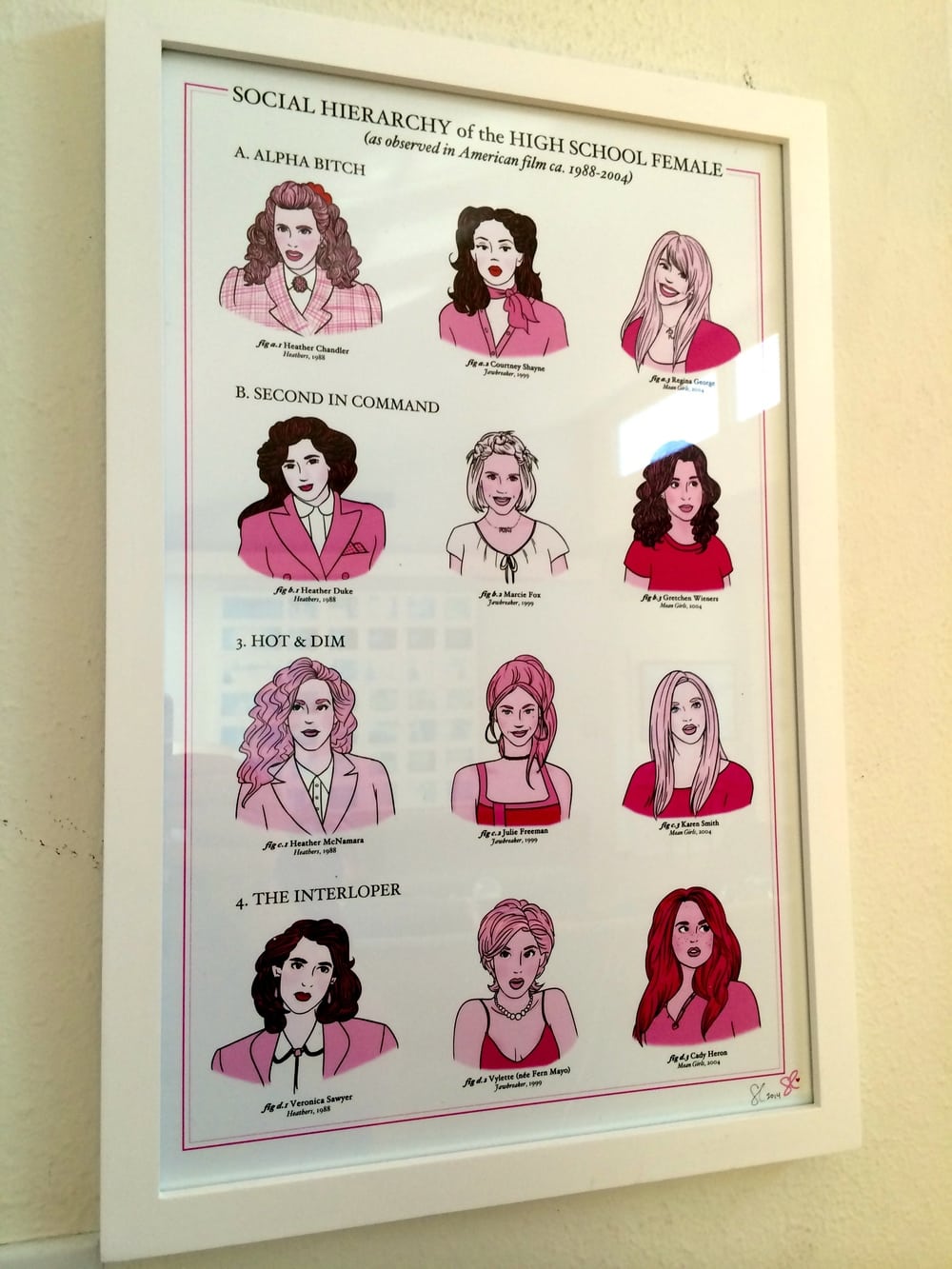 While the chart above shows a few different high school movie tropes, the Beta Bitch is the sidekick role. She’s not the character with the funny one-liners, the narrator with the heart of gold, or the totally hot and evil villain. Instead, she’s the villain’s best friend. At times, she’s portrayed as well-meaning, like Gretchen Wieners from Mean Girls. Other times, she’s just desirous of that coveted “best friend” spot, like Penelope from Gossip Girl. There’s also the Beta Bitch that’s eager to take over the role of the Alpha (see: Heathers), and the one that might be the second-in-command but is even eviler than the Queen Bee – like Miranda from As Told By Ginger or Santana from Glee.

The Beta Bitch trope enforces the idea that there’s a hierarchy among women. It also gives viewers and readers the notion that friendships between women aren’t meaningful and wholesome, but rather competition. In reality, female friendships are much more complex. While there are certainly catty individuals out there, genuine friendships aren’t about being the boss.

But the entire concept of the Beta Bitch is even more damaging once you peer beneath the surface. The Beta is often viewed as a kinder, gentler version of the Alpha. To impressionable viewers, this is a sign that women in control are bitches, and that females who follow are generally more well-meaning. There are, of course, the occasions where the Beta is crueler than the Alpha, or secretly wishes to do her in and take over her empire. This signals a stereotype that women are superficially competitive and will do anything to be on top amongst their peers.

Speaking of competition, a major plot point of many teen dramas centers around the group vying for the role of Beta.  Generally, the “interloper” figure – like Cady from Mean Girls or Vylette from Jawbreaker – pushes the original Beta out of the way. The popularity then gets to her head, and she finds herself encroaching on Alpha territory, and making an enemy out of the girl whose friendship she desired all along. While it’s engrossing to watch the rise and fall of any main character, there are all sorts of things wrong with this presentation. It draws many questions: Is wanting to be popular really such a bad and shallow thing? Is it really possible for only one girl the be the queen bee?

And then there’s the fact that there’s often nothing to the Beta figure aside from the fact that she’s a beta, a follower. Take Gretchen from Mean Girls. Even after her problematic group crumbles apart, she moves on to beta-ing for another social queen. There are certainly people who are followers rather than leaders, but it’s lazy writing to assume a sidekick is just, well …a sidekick. (No hate to Mean Girls, though. I don’t care how shitty tropes are. I friggin’ love that movie.)

Finally, the trope is messed up because it pushes the stereotype that women are cliquey. The Alpha and Beta girls are often the closest in their girl group, which is usually already small, to begin with. They only deem a few “worthy” of their friendship, and one another worthy of any display of genuine affection or special treatment. In reality, friend groups, including sororities, have complex dynamics within them. It’s possible for a group of best friends to all actually be best friends.

Well, you can look at this one of two ways. For instance, take Gossip Girl. You might view Serena and Blair’s constant competition to be Alpha as subversive. After all, neither of them is the true Beta, and both are strong characters with their own unique goals, dreams, and fashion senses. On the other hand, it just reinforces the damaging idea that there is constant competition within female friendships.

We can also examine parodies like YouTube’s The Most Popular Girls in School. The show, featuring mutated Barbies, mocks high school stereotypes as often portrayed in media, including the Alpha/Beta dynamic in girl groups. (Awesomely enough, Brittany and Mackenzie both fulfill the trope and have a genuine, though toxic, friendship.)

There are also a lot of good books and movies out there that show groups of women that embrace one another and don’t vie for first place. Though there are definitely problems with some of these friendships and some of their storylines, the relationships between women in The Sisterhood of the Traveling Pants by Ann Brashares, HBO’s Sex and the City, and popular 90s sitcom Friends are pretty empty of this trope.

The Beta Bitch trope might show that it’s better to lead than to follow, but it does a disservice to a lot of insecure teenage girls out there who just want to have friends. It also enforces stereotypes about competition between women and makes it seem as if none of our friendships are truly genuine. Finally, it leads viewers to believe that a quest to be well-liked is shallow when in reality there’s nothing wrong with wanting to have lots of friends. Yeah, this trope is in all of my favorite teen movies. But it’s still something we should examine rather than just straight up accept.