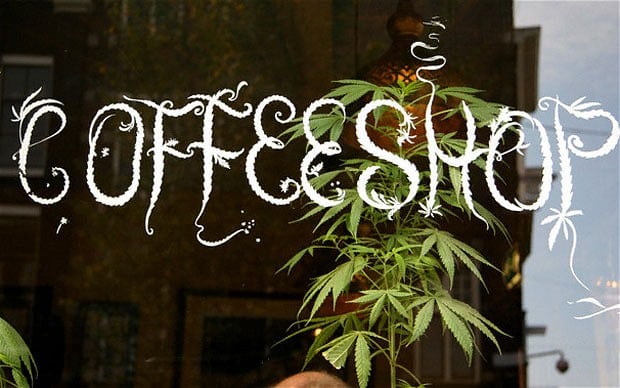 The legality of marijuana is a strange gray area in the Netherlands. While technically the sale of weed is not allowed, it would be hard to walk through Amsterdam without catching a whiff of weed in the air. In practice, coffee shops are held to strict standards, forbidding the sale of alcohol and sale to minors. It is also illegal to smoke weed on the streets, and if you’re caught it can mean a fine. Similarly, smoking cigarettes in coffee shops is prohibited. So make sure you keep your smoking areas straight.

While I’d like to give you an idea of a typical coffee shop in Amsterdam, there really is no such thing. Coffee shops range from looking like cafés, with cozy chairs and lots of room to lounge, to looking like sports bars, with televisions above each table. The important thing to know is: they’re everywhere. Seek out the one that fits your taste; take advantage of online reviews. Coffee shops often offer different strains of weed that are meant to affect you differently. Weed is sold by weight as well as in prerolled joints. There is usually a bar where you can order, and plenty of room to hang out. Many coffee shops also sell food and non-alcoholic drinks, which is good to know when you’re stoned and craving french fries.

If you’re a veteran smoker, you can probably make your own way from there. Those of us who are newer to weed can benefit from the following tips. Firstly, go for the prerolled joint, so you don’t have to stress about rolling your own. Don’t be shy about asking the “bartender” for recommendations. Pretty much everyone in the Netherlands speaks excellent English, so they will be able to give you clear and knowledgeable advice. Let the bartender know if you’ve never smoked before or if you’re new to it. Once you’re smoking, take it slow. It will take a while for it to kick in all the way, and you don’t want to end up so high that you regret it. Also make sure that you very clearly know your way home, or that you have a sober friend who knows what they’re doing. Amsterdam’s maze of canals can be confusing, especially at night. If you’re worried about losing your way, put the route from the coffee shop to the hotel into your phone beforehand, and make sure it’s well charged! 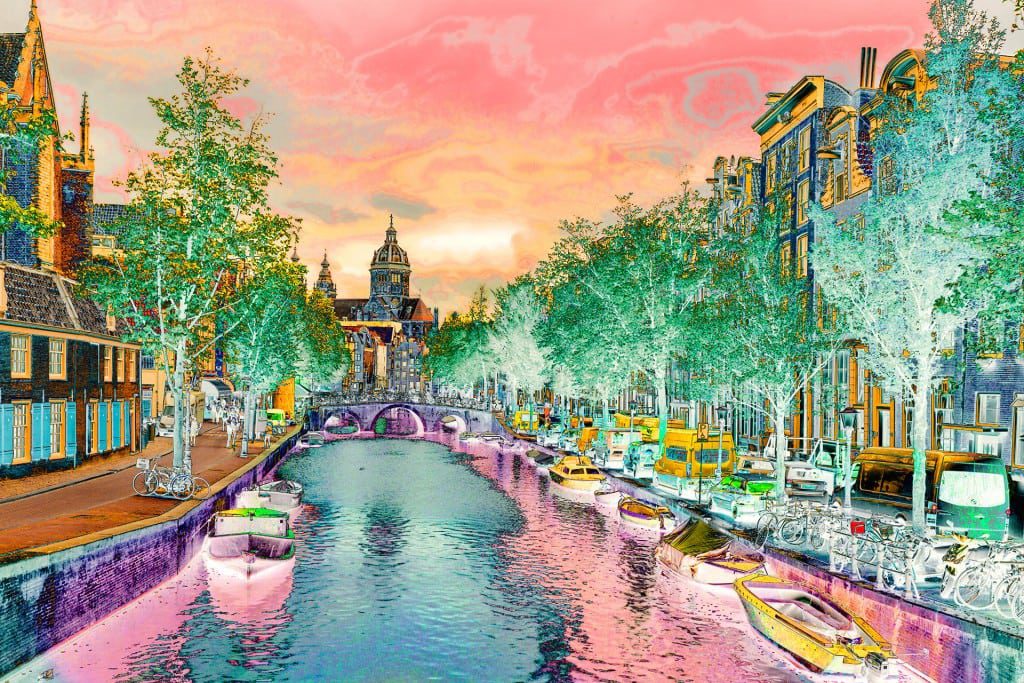 Weed isn’t the only drug that’s legal in the Netherlands. Many psychedelics, including peyote and truffles (a different part of the fungus that produces shrooms), are available at “smart shops,” along with a variety of other drug paraphernalia. Shrooms are no longer available, having been outlawed in 2008. Much like at coffee shops, don’t be afraid to ask for advice. The people behind the counter know a lot about what they’re selling and are usually happy to help. Also make sure that you take their advice, especially if it’s your first time. Don’t try to push your limits just because you’re in a foreign city.

If it’s your first time taking drugs, Amsterdam can be a risky place to do it. Truffles are probably your best bet for your first time tripping. Take them during the day and find a nice, outdoor place where you can enjoy your trip without worrying too much about other people or traffic. Vondelpark is a good bet if it isn’t raining. The Reiksmuseum gardens are also free from 9 a.m. to 6 p.m. and full of interesting sculptures that will only get more interesting as you go. Don’t bring a bag or anything too large, just put the essentials in your pockets and leave them there until your trip is over. Even more so than weed, if it’s your first time, it’s a good idea to have a sober “trip sitter” keep an eye on you. Don’t try to find your way home on drugs — just wait until they’ve worn off and then head back. 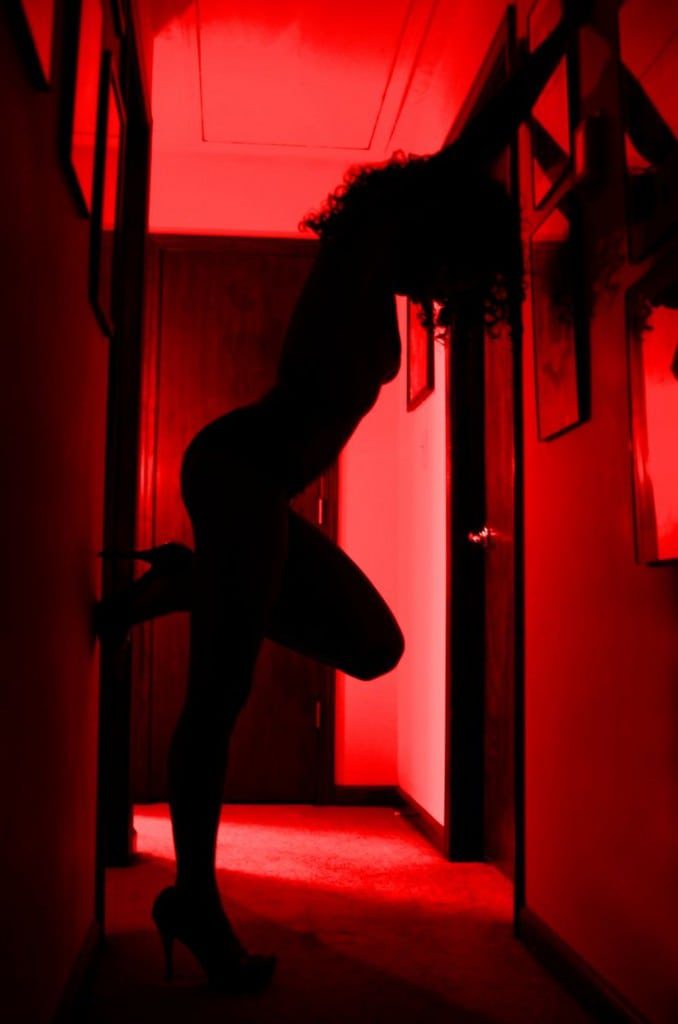 The Netherlands is one of the few western countries where prostitution is 100% legal. The Red Light District is full of scantily clad women, swinging their hips and beckoning to passersby. Prostitutes in the Red Light District stand in one of almost 400 windows lit by red lights until a customer comes along. If you spot a blue light, that means that the window is occupied by someone transgender (usually someone not aligning with the sex and gender binary). The laws surrounding prostitution are designed to keep it safe and consensual for sex workers. They are allowed to turn down any customer that they want, and they register as freelance workers the same as anyone else. The success of this is often debated: if you’re interested in the history and reality of prostitution, stop by the Red Light Secrets Museum of Prostitution.

The Red Light District can be fun to hang out in, since it has some of the best bars in the city, but it’s important to follow a few rules. It goes without saying: be respectful. These women are working, the same as anyone else. You can wave hello, but don’t do anything to mock them or make them uncomfortable. Secondly, don’t take any pictures. While pimps are technically illegal, they do exist, and these men will throw your camera or phone (or even you!) in the canal if you try to snap a photo. Finally, keep your hands on your purse. The Red Light District is notorious for pickpockets.

Since most of us probably aren’t trying to pay for sex, the Red Light District offers a more interesting pastime. Sex shows are an Amsterdam staple, and definitely worth the money. This is one thing where you definitely get what you pay for. A typical sex show will include a strip tease, a man and woman having sex, and something bizarre. Bizarre usually involves audience participation and can range from 50 feet of ribbon pulled out of a vagina to eating a banana out of one. The Moulin Rouge offers fairly cheap shows, and you can get pretty close to the stage if you’re interested. The Casa Rosso also offers shows. They are far more expensive, but the show is longer and higher quality. Just don’t buy drinks while you’re inside; they’re super expensive! 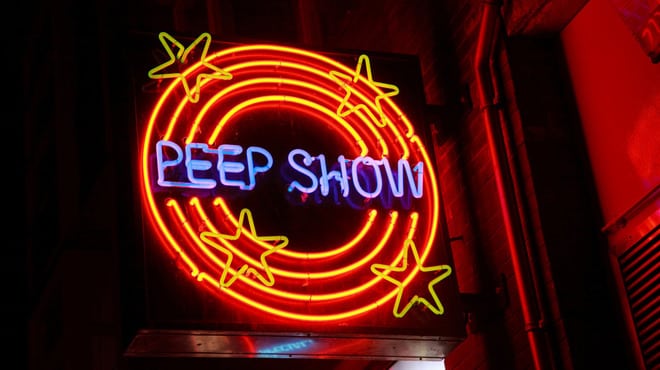 Amsterdam can be an incredible experience if you do it right. Make sure to understand your limits and remember that you don’t become invincible just because you’re on vacation. Also be aware of the various laws that come into play with sex and drugs. Once you’ve got all that down and you’re sure you’re being safe, go wild!