I had made use of general objects with previous sexual partners including belts, collars, and tape, but it occurred to me that I had never, in fact, used a foreign object in order to get off. In my defense, I like the ‘real deal’ – as most individuals do. Who doesn’t love the skin on skin passionate love-making?

Fortunately, within the last two weeks, probably due to a visit from Mother Nature, my sex drive appeared to have been reincarnated into that of a teenager’s. With no visible penis in sight, I figured a trip to the sex shop was in order.

As I observed the vast range of phallus-shaped contraptions, I wondered how on earth some of them could fit inside me, let alone how they worked in the first place. It only seemed right, as a sex-toy amateur, to start cheap and cheerful. This came in the form of a bullet. Everyone I know owns a bullet. It is practically a second lipstick to some people.

Sending vibrations to your clit via a small button, the bullet-sized toy can send your nerves flying. Before I left the shop the cashier said “enjoy” to which I responded with a grateful “thank you” prior to thoughts of me experiencing the wildest night of my life. Me, myself, and my bullet. Together forever.

The girl was dressed as a cheerleader and her parents were away for the night. With a favor for teasing myself, I watched the video for 20 minutes, wriggling as I felt myself getting wetter. Finally, I turned on the bullet and proceeded to squirm in both delight and slight hesitation as I felt the vibrations against my clit. 15 seconds in and I had come. 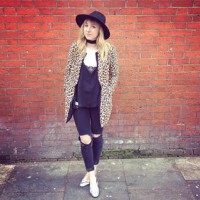 A poor girls Carrie Bradshaw but with an edgier taste in both shoes and sex.