To be completely honest, I’m not usually a fan of shower sex. At all. In fact, I rarely ever enjoy even showering with a partner. It isn’t that showering together isn’t fun – it’s a TON of fun when it’s done right. But it’s very rare to come across the right combination of circumstances for perfect shower sex.

First, you need a big shower where you can freely move around without feeling like you’re going to slip and crack your head on tile. Preferably, you’ll have a shower without a curtain that awkwardly sticks to your thighs and ass as you thrust. If you’re blessed enough you have a glass door, you still need to worry about finding a place grip while you position your body and hold on while getting pounded. Once you’re relatively comfortable and secure, there’s still the problem of having sex in the water. One of you will inevitably be cold and half-dry while the other is practically drowning. Basically, no one wins – and it’s certainly never how it appears in porn.

Note: This product is no longer available, but you can shop dual shower heads on Amazon!

Essentially, there are three necessities for perfect shower sex: enough space and places to position yourself, no awkward curtain, and enough water for two. Sometimes, you can get a 1 or 2 out of three. You may find a shower that’s big enough, without a curtain, and if you’re lucky, a few places here and there to hold on to and position yourself with. But, even if you’re in the ideal shower – there’s still the issue of sharing the water equally.

Just over a year ago, I was staying at an awesome hostel (that was basically in the jungle), that had a huge outdoor. It was the image of perfection – an open space with geckos gliding along the walls, trees above, and only the sounds of water and bird calls. It had two separate shower heads, two long benches, and enough room inside for a small orgy. It was the perfect place to give dual-headed sex a go – and of course, I jumped on the chance to try it out. It exceeded all my expectations – and since then, I’ve been dreaming of installing dual shower heads in my own place (that is, once I buy the Playboy Mansion).

Recently, my friends at She Vibe sent me a set of Dual Shower Heads made by a company called Sportsheets, who created this awesome “Sex in the Shower” line. Aside from Dual Shower Head, they have a bunch of waterproof handles, foot rests, and handcuffs that suction onto your tile and lock into place. They even have a vibrating loofa and sponge, if you’re so inclined.

I was super excited about the Dual Shower Heads. Of course, my tiny apartment’s shower is still a bit small for two and has an awkward curtain – but the Dual Shower Heads bring me one step closer to having hot, steamy, pleasurable shower sex. Of course, it’s not two separately controlled shower heads – which would require lots of expensive construction and a fine from my landlord. But, it does take your shower head’s typical one-stream design, and split the water into two. 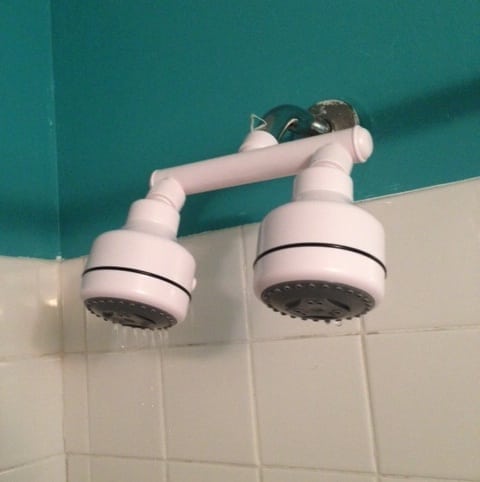 Installing the dual shower Head was seriously easy. Definitely much easier than I expected. It’s made of light-weight yet sturdy, body-safe plastic that fits any standard half inch pipe, and just screws on. Many shower heads screw right off, but if yours is stuck or on very tight, all you need is a wrench to unscrew your old shower head and screw this one on instead. You can move it around horizontally or vertically. Vertically would be great if one of you is very short, and the other is very tall. I put mine kind of half and half for the best of both worlds. Each side of the shower head can be adjusted and positioned to perfectly hit where you want it to. If you have a small shower like me, just be sure to watch out where you aim the heads. It’s very easy to spray your whole bathroom with water if you put them in the wrong direction and aren’t paying attention to your shower curtain. 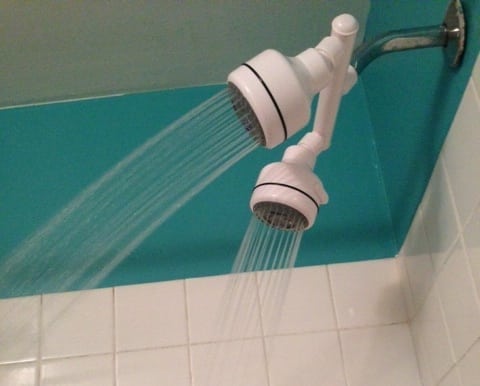 Once you have them all set up, you get to play with the settings! They’re controlled by an easy slide mechanism, with a left, middle, and right setting. The left setting is a fine shower spray – basically the same as a regular shower, just with two. I thought that with two shower heads, my typical water pressure would be cut in half, and I’d end up with two trickling waterfalls. But, it didn’t make any difference in my water pressure at all, and maybe made it even a little stronger. The right setting is a massage, which is a pulsating stream that comes from the center rather than the outside. It’s pretty powerful and very relaxing, especially if you have sore muscles. The middle setting is the fine spray with a massage. This setting is cool in theory, but it reduced the water pressure slightly, so it wasn’t my favorite. I would have preferred each to be as strong as they are on full power. Each of the settings can be controlled independently on each shower head. So, one side can have a fine spray while the other has a massage. That way, you can have two different experiences at the same time, and put them exactly where you want them. If you want to upgrade in the future, you can replace their current shower heads with any other shower head – like a handheld! The only downfall is that you can’t turn one side off and use the other by itself – which would be perfect when showering solo. Both shower heads have to be on at the same time. But since it’s so easy to put on and remove, you can definitely keep your regular shower head for solo use and put this shower head on when you want to shower with a partner. 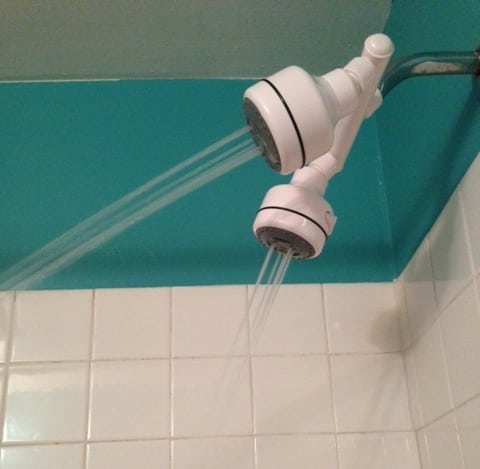 The box half-jokingly says “conserve water, shower together!” – but in reality, I’m not sure if dual shower heads really conserve water, or if you’ll be seeing a spike in your bill. More water comes out, but if you’re showering solo, you can put the water on two places at once, so you may be able to shower faster. If you’re showering with a partner and you’re washing more than you’re playing, dual shower heads means there’s less time switching places and trying to both stay in the water – and more time showering. Either way, dual shower heads are awesome whether you’re just enjoying a dual back massage, or enjoying some chill-free shower sex – so to me, it’s worth a couple bucks more on my bill. 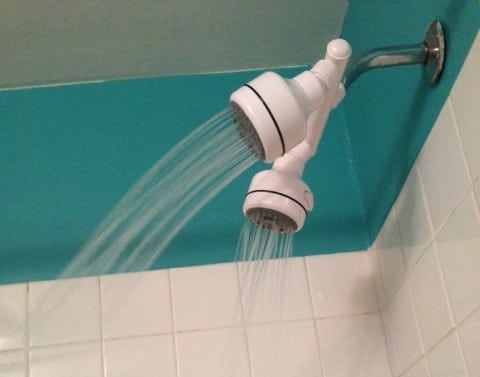 The shower heads are perfect when showing with a partner, because you don’t have to trade places to keep warm and there’s plenty of water for both of you! Does it make shower sex better? Well, yes! But if you have a small shower with a curtain like me, you’ll still have the same issues as before – except now, you’ll both be wet and warmer. Personally, I love the double shower heads even when I’m showering by myself. I seem to get clean a lot faster (especially when washing my hair), and love that I can be totally under the water without getting cold. I love that I can position them exactly where I want them – and I’m seriously considering getting a handheld. Even if I never planned on using it with a partner, I’d TOTALLY get this dual shower head. It’s a fabulous accessory that’s perfect for way more than just sex in the shower.

Note: This product is no longer available, but we still recommend dual shower heads on Amazon!

If you like our site, posts, and reviews
please click our affiliate links before you purchase!
This way, a small percentage of your sale comes back to us, at no cost to you.

Note: This review is sponsored by She Vibe, and I received this product for free in exchange for an honest review.  Some links are affiliate links, which help support the site. All opinions are 100% honest and my own. I only recommend things I would use myself! Read more about our reviews.