“We’ve Never… But We Will!” Game Review

The “We’ve Never… But We Will!” game is a card game played with two or more couples. It’s pretty self explanatory, and very exciting to play. I sent out a mass text to my friends, and we showed up with our hookups, bottles of liquor, and an adventurous mindset ready to play the game. Spoiler alert: we LOVED it! 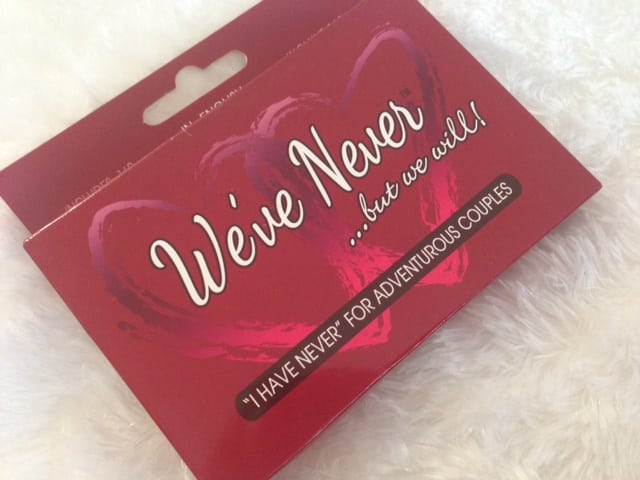 The game comes with four different plastic packaged decks of small cards (and I mean small – the cards are less than 3 inches by 2 inches!), an itty bitty spinner, and a few tiny envelopes. At first I was confused why everything was so small, until I realized it was intentional to make the game descrete to take on the go. It would be much less noticeable to throw this small game in your purse than it would to bring an entire foot long board game box. It makes sense the pieces are small, so they’re easily portable. And it’s not an issue because the font is completely legible.

The cards are divided into four categories:

The spinner contains four sections listing each category, so you know which deck to select from.

The entirety of the game comes in Spanish as well! 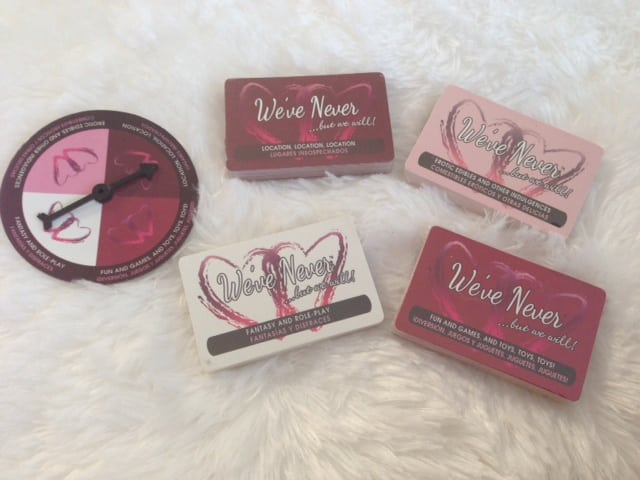 If any players are not drinking, all the rules apply, just ignore the drinking aspects. 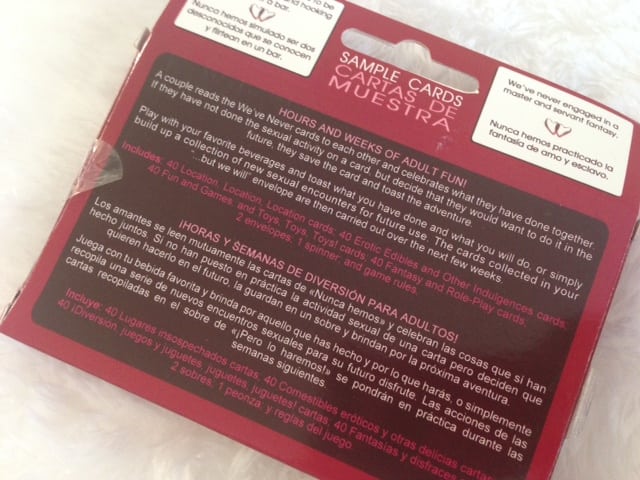 I was so excited to try this game. It’s a way more fun spin off of “Never Have I Ever” and there’s more opportunities to drink. All my friends piled into our living room and cracked open our booze, eager to get started.

Most of the cards were pretty typical “scandalous” sexy activities. Like, licking whipped cream off of each other, or having sex in a bathtub. And for the most part my friends were really kinky! It was almost more fun discovering what other couples had done!!

Some cards in this were really weird for us, though. I remember one of my friends pulled a card that said, “we’ve never made a fruit salad on one of our genitals and had the other eat it off,” and everyone went into a shock. It was just so random no one expected that to be something on the card. But then her partner said he would do it, and so did she, and sure thing, the next night I got a phone call that her boyfriend ate cantaloupe, watermelon, and strawberries off her lady parts.

By the end of the night, we were all drunk, having an amazing time, and all of us were discussing what things we would be trying with our partners – whether or not we had selected that specific card.

The only minor thing is that the spinner is so tiny sometimes it just doesn’t want to spin. It’s best to hold it up off the table and spin it like that, so the friction from the table doesn’t slow down the arm.

However, it was super convenient that the cards are not only labeled, but each section is a different shade of pink/red. This is helpful for once you get your buzz on and you can’t read the super tiny lettering on the spinner. 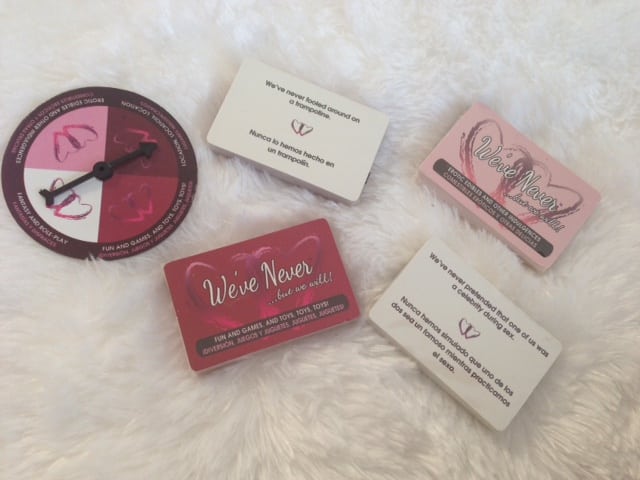 I would absolutely recommend this game. I loved it! It was so entertaining and everyone had the best time playing. I like how conveniently portable it is, and how different and non generic the cards are. My one bit of advice is instead of taking five cards home in an envelope, just use a notepad to write down the things you want to try. That way everyone can write down what they want to do and the cards don’t go missing for next time you want to play.

This game was ridiculously fun, everyone had a blast, and no one felt uncomfortable saying really kinky things they had done in the past! It pushed us all out of our comfort zones and knocked down any kink shaming or barriers we had between us (or between partners!). This game is so fun, I seriously can’t wait to play again.