In this series, I will explore rape culture in it’s entirety (to the best of my ability). I have broken it into parts because of the volume of information and the triggering/emotional impact of the content. I will try to provide as much information as I can, but as always, if you have any remaining questions, please leave them in the comments.

Take a deep breath, let’s learn about this together. 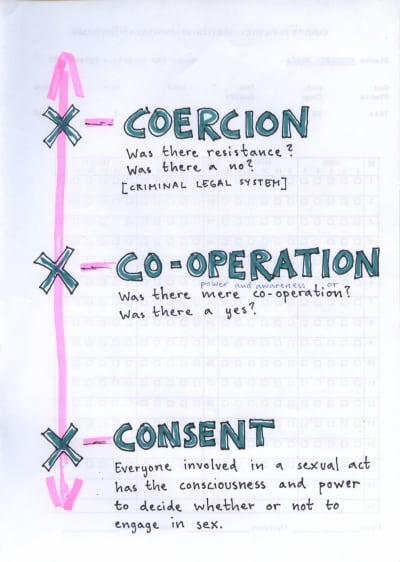 Before we can discuss what rape culture is, we have to define “rape”. I’ve chosen the FBI’s definitions of rape for an overarching definition, but the laws do vary by state. (You can check your state rape laws here.) The FBI has changed their definitions of rape recently from a very patriarchal definition, to three different definitions which I’m happy to say are actually very all encompassing and gender neutral. You go, FBI! 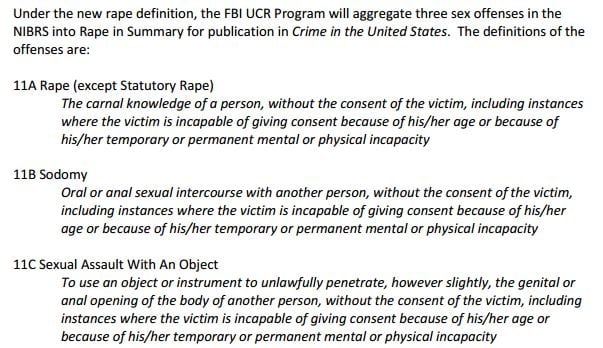 The FBI doesn’t even stop there. They go on to define that last line more precisely, as people under the influence of drugs or alcohol not capable of consent due to their temporary mental incapacity. They even included a line to combat the idea that rape is always violent, with “Physical resistance is not required on the part of the victim to demonstrate lack of consent.” You can find the whole report here. 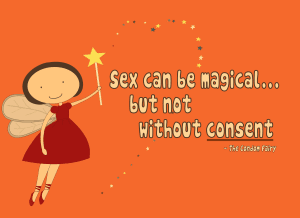 While the definitions of sexual consent also vary from state to state, the FBI’s definition lays out times when a person can not consent to sexual activity.

That’s right. That means having sex with drunk people, is rape. You cannot legally express consent if you are drunk, high, or even if you don’t fight back. It’s rape unless there is anything less than an enthusiastic yes. For more consent information see this article here and watch the video below!

Alright kids, I’ll say what you’re thinking: “But I’ve had sex drunk and I don’t feel like I was raped/like I’m a rapist!”

Since I’m an optimist, I’m going to assume that everyone’s intentions were good. But that’s not always the truth. Unfortunately, I would say 50% of my sexual encounters happened when I was too drunk to consent. While I might have said yes in the moment, the fact that I can’t remember doing it? That makes my consent non existent.

So what? Should you never have sex ever again while you’re drunk? No. But you should be way more careful!

Legally, if your partner is drunk – obviously or not obviously so – and you have sex with them, you’re a rapist. So, check in with them! Ask your partner how many drinks they’ve had, ask them how they’re going to feel in the morning, and (hopefully this goes without saying) specifically ask for consent for specific acts before you do them. If they seem really drunk, save sex for another night. (It will probably be better then, anyway!)

I know, I know! This is so not fun to think about. Where went the days of carefree drunk hookups? They’re gone. This is a world where the absence of anything other than an enthusiastic remember-able YES! is not consent. Don’t take just my word for it, watch Laci’s video below.

As she mentions, the relationship between sex and alcohol changes depending on how much you drink. “If you drink alcohol responsibly, a little bit of alcoholic sex is not the end of the world.” But, there’s a big difference between “tipsy” versus “drunk” or “wasted”.

take note of Laci’s suggestions on how to look for enthusiastic consent, and be sure your partner is comfortable, enjoying themselves, and consenting knowledgeably throughout. Also, remember, it’s never too late to say “no”, “stop”, or that you’re uncomfortable – and leave!

Coercion is a nasty little thing that could be called “consent” if viewed by someone who doesn’t know relationship dynamics, general social cues, or doesn’t even know that they’re coercing their partner. In my own words, coercion is any convincing or arguing with someone’s decision that they feel comfortable with (whether it’s saying no to sex, or any specific sex act). This convincing goes on until, through manipulation, it’s a decision the coercer feels comfortable with – and the coerced feels uncomfortable with.

The official definition of coercion, according to the legal dictionary, is:

“The intimidation of a victim to compel the individual to do some act against his or her will by the use of psychological pressure, physicalforce, or threats. The crime of intentionally and unlawfully restraining another’s freedom by threatening to commit a crime, accusing the victimof a crime, disclosing any secret that would seriously impair the victim’s reputation in the community, or by performing or refusing to performan official action lawfully requested by the victim, or by causing an official to do so.” 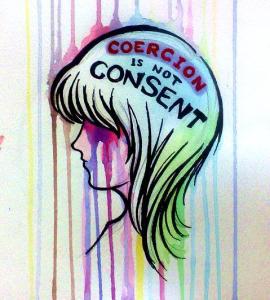 Yuck, huh? So don’t do it! If someone states their non-consent or any other choice or opinion, that’s their choice. No one has a right to make sexual choices for anyone else – and if you “convince” someone into having sex… you’re a rapist.

I’ll go into rape culture in detail in my next article, but here’s a teaser: it has a LOT of references to Sam Pepper.