The time has come for a new era of cocky, self -absorbed, disrespectful boys. This time around we’re calling them fuckboys. Here’s how to outsmart one. 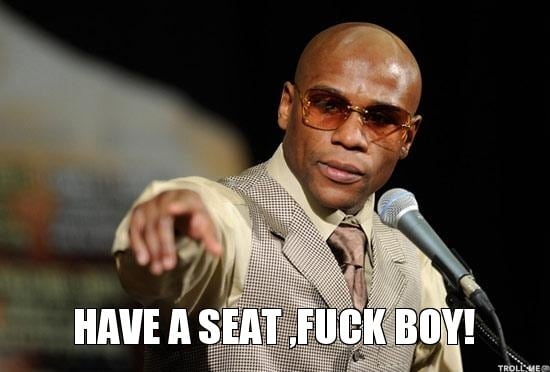 If You Think It’s Too Good to Be True, It Is

When first meeting a guy, things are supposed to be a bit awkward. The awkwardness says nothing negative about your chemistry, it just means you’re getting to know one another better. If you meet a guy and he instantly knows all the right things to say – back up, he’s probably a fuckboy. If he’s throwing sappy clichés at you left and right, he’s also throwing them at every other girl in his contact list. Fuckboys know what to say to win you over, so be careful if he has you swooning.

If He Acts like He’s Not into You, Move On

The number one game a fuckboy loves to play is tag. He wants you to be going after him and for you to be trying to earn his attention. Any girl he has to work to gain attention from isn’t worth his time. Fuckboys prey on girls who will text them first. They want you to be up late thinking about them, and they thrive on those double texts you send when you’re at the bar. They’re really self-absorbed, so the more you chase them, the bigger their ego gets.

Initially, he’ll be all about you. Whether it’s the first time you’ve met in person, or you’ve been talking to him for a while, he’ll have all his physical attention on you. He’ll be playing pong, but be turned to face you while ignoring his partner. He’ll tease you and lure you in all night in an effort to get back to your place. And you know what? It’s really easy to fall for. Who doesn’t like a guy acting like no one else in the room exists but you? Who doesn’t like him grabbing the small of your back in front of his friends? He definitely wants you to know he’s into you, but he be wary he might be playing games. Keep mindful of his intentions before getting in deep.

Look at His Friend Group

Watch how his friends treat girls. It’s a key sign of how he will too. Listen to their jokes and behavior, then assess their maturity. Any group of guys that talks about girls every other sentence has too much time on their hands and is desperate to get laid. If they talk poorly about other girls or make fun of their ex-girlfriends or past hookups, they’re complete dicks. If you can tell one of his friends is a fuckboy, chances are he is too. Mature guys don’t spend their time hanging out with immature guys. Just know if he’s hanging out with assholes, he’s one too.

You’re bound to catch him in at least one lie. If you’re trying to determine whether he is a fuckboy or not, just because he lied or made a mistake once doesn’t mean you should never speak to him again. But if he says he’ll meet up with you and cancels plans often, or lies about where he is or who he’s with – drop him. It’s not worth sitting around wasting your time. He’s a liar and lies can only make things worse.

He’s going to sweet talk you back into his life as hard as he can. When he messes up he’ll apologize and say he’s so sorry and he’ll never do that again, only to do the same thing the next night. Sincere apologies consist of someone accepting blame, taking responsibility, and changing their behavior. Fuckboys are great at making you feel like you’re the problem, not them. You get mad he didn’t text back for two days? You’re too clingy. You’re upset he ditched you to hang out with his guy friends? He thought friendship was important to you. Don’t let him persuade you. Keep your eyes open and stay vigilant for when he tries to deceive you.

Listen to Your Friends

The saying love is blind is so true. Although this may not be love, he’s definitely someone you’re interested in. If your friends are telling you he seems scummy, take their word for it. You’re too emotionally involved in the situation to make an accurate decision and they’re saying it to help you. Although it may seem like your friends are wrong, chances are they aren’t and they’re just trying to save you a lot of heartaches.

If you’re too far in and you’ve already fallen for a fuckboy, here’s how to handle it:

He thrives on your attention, positive or negative. As long as you’re calling, he’s winning. It’s best to just cut off all connections with him. If you’re strong enough to just stop talking to him and be done with it, then do that. If you know you’ll constantly be checking his social media to see what (or who) he’s doing, block him. It’s better to be ignorant when it comes to what he’s up to after you stop talking. He’s a fuckboy, so as soon as he realizes you’ve lost interest, he’s on to his next target. You don’t need to see what his life consists of, just get rid of him. He isn’t worth it.

It’s very easy to fall for a fuckboy, they’re good at making girls like them. Once you get emotionally involved, it’s a vicious cycle of him making you feel really bad about yourself, then really good, over and over. He’s torn you up a bit, but that’s on him, not you. You’re bound to fall for at least one fuckboy in your life, so don’t be too hard on yourself. You just need to remember not to lower your standards next time. Remember what you deserve and don’t allow anyone to treat you any less than how you would treat them.

As you start to talk to potential baes and venture into new relationships, remember all the things about this fuckboy you didn’t like. Don’t go for a guy who reminds you of him because it’s just history waiting to repeat itself. If you find yourself falling into the pattern of repeatedly dating fuckboys, really take some time to acknowledge what you deserve. It can be really lowering to your self-esteem to have someone put you down and take advantage of you. If you can remind yourself how important and valuable you are, then your chances of falling for another fuckboy are slim to none.