What To Do When They Don’t Text Back

At the beginning of every relationship, everything they say and do can be evaluated to tell you how they’re feeling about you or if they’re “just not that into you”. How long they take to text back and what they say if they DO text back have become two of the biggest tells in the technology generation. So how are we supposed to handle ourselves if they lag on the response we’re waiting for?

Every cell phone sold comes with the inevitable owner’s manual that no one reads, every update with terms and conditions that we blindly accept, and online tutorials on how to conserve our forever draining battery life. With the plethora of information on how to use the stupid thing, you would think Apple would also tell us how to react when we get the courage to send a text to the person we like and they fail to respond. While there are six billion texts sent in the United States daily, I’d wager half of them are ignored by people we will to reply to us. Every vibration could be the message we’re waiting for and our disappointment skyrockets with every Twitter notification and Snapchat received that isn’t from object of our affection.

If you’ve ever had a crush and sent them a text without receiving an immediately response, then you’ve also experienced “ghost vibrations”, where we hear our phone vibrating when it never did. We stalk their Twitter to make sure they hasn’t intentionally ignored us, make excuses for their delayed response, and ultimately decide they must have died out of excitement from reading the original message you sent.

How To Deal With Silence

Coming from a generation where we had relationships prior to the texting generation and after it blew up, I have officially had every reaction there is to guys not texting me back from the good, the bad, and the ugly. There’s the route of reciprocated silence where they eventually fall off the face of the earth and we act like they never existed in the first place, the route of persistence where you send multiple texts, and the route of crazy where you send a second text bitching them out for not responding that ultimately makes you look like a needy psycho bitch. So where’s the happy medium? How do we deal with the silence that inevitably eats at us and makes us feel like we’ve done something wrong? 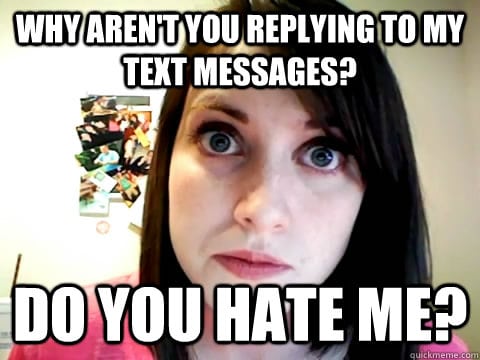 Start by reminding yourself that it’s casual. In the beginning of every relationship, we put such high expectations on this person that seems so perfect for us, that when they don’t perform the way we want them to, we condemn them to death. How dare they not text you back in the perfect allotted amount of time and use the even more perfect sentence structure while pulling words from our brains? If you keep reminding yourself that this is casual, your responses will be casual and it will eventually rub off on them, allowing the conversation to flow without the stress of time and perfect responses.

If a person likes you, they will text back… eventually. If you make yourself crazy in the time gap, your replies are going to reflect that. Chill the fuck out and remind yourself that no man wants to date Britney Spears circa 2007. Relationships are full of deception so if you have to make yourself seem more easygoing than you really are, do it. Do you think guys are 100% upfront in the beginning? No, because they know about PR. They make their flaws seem endearing and later, when things are more serious, we realize that he’s actually not that charming, doesn’t go to the gym that often, and loves Nickleback.

If you’re waiting days in between texts but still convinced they like you then maybe you need to try some reverse psychology. Be strong willed and ignore the next couple of texts you receive from them. If they do like you, they’ll try harder and you’ll hear from them more frequently. If you don’t? Well then it’s time to take a page out of Jack Burger’s book and remember they’re just not that into you. If you’re not stressed about the timing of their responses then the surprise of one will leave that goofy grin on your face that only a crush can give you.

When In Doubt, Chill Out

Moral of the story is to calm the fuck down and not allow your moods spike and plummet depending on their response time. In the world of feminism, we have been given the power to create our own happiness. So why do we witness our friends bad moods at the beginning of a relationship that hasn’t even blossomed yet? Give that girl a drink, grab your soapbox, and remind her that if they don’t text her back then they’re a fuckboy. Xanax was created for a reason ladies, so either pop one or take a couple of deep breaths before you start questioning your wardrobe choices because they didn’t reply immediately.

Our downfall is our ability to make a mountain out of a molehill by over thinking every word, comma, and emoji. It’s 2015 and if we can run for President, we can sure as fuck conquer the texting world. So put the phone down, stop worrying, and live life outside of the ghost vibrations. 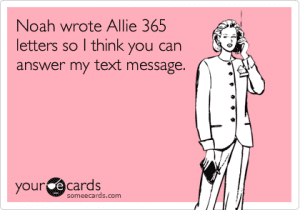