While it may not be as popular a destination as Barcelona, Spain’s capital is a beautiful international city with a truly Spanish nightlife. Expect to be out until the sun rises and to wake up the next morning with the worst kind of wine hangover.

A visit to Madrid lets you explore some of the best things about Spanish culture, all in a vibrant exciting city. You’ll undoubtedly stumble upon Puerto de Sol, the “Times Square” of Madrid. Plaza de Espana and Gran Via also offer shopping, eating and people watching opportunities nearby. Take a day to visit Retiro Park and row around the lake. Inside the massive park, the Crystal Palace offers interesting exhibitions on a regular basis. Stop inside the Prado Museum to see works by incredible Spanish painters and check out the nearby Thyssen for more modern art. There’s lots to see in Madrid, but you can find plenty about that on Google.

What you can’t find are the insider tips about Spanish nightlife. These tips and tricks will make sure you have an unforgettable night out. Keep in mind: the Spanish know how to party. After a night out in Madrid, you’re going to need a siesta.

In Spain, people eat, sleep, and party later than anywhere you’ve ever been. If you find a restaurant at 9 P.M., you’ll be having an early dinner. Don’t get to a bar before 11 P.M. and don’t expect to be home before 7 A.M. In Madrid the metro runs from 6 A.M. to 2 A.M. and you’re much more likely to get home on the first train than the last.

Since the nightlife starts up later, start your night with dinner and a few drinks. Tapas restaurants are common in Madrid, offering many small dishes that you can share between the group. Stay away from Sol and Gran Via when getting tapas, and head over to La Latina. It’ll be a little cheaper and just as tasty! Just don’t be surprised to see several legs of ham hanging on the wall wherever you go.

If you’re really on a budget, try the chain restaurant 100 Montaditos. They’re everywhere in Madrid, and they offer cheap bocadillos (little sandwiches) and 1.5 Euro pints of beer or wine. Another good budget option is La Surena, which serves buckets of beer for as little as 5 Euro. Both of these places have daily specials, so be sure to check them out.

If you have a little more to spend, try one of Madrid’s rooftop bars. It can get pricey quickly, but the views are unbeatable. A lot of Corte Ingles department stores will have a bar on the top level where you can enjoy awesome looks of the city. 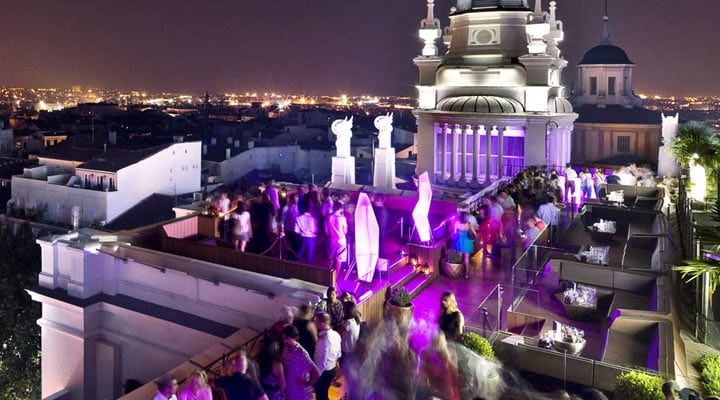 Pregaming in the Park

Once again, because of the late night, drinking outside is an essential part of Spanish nightlife. Try to visit Madrid during the warmer months to enjoy the outdoor drinking culture. Just be warned: It is not technically legal to drink outside in Madrid, and you can be fined for it. That being said, it’s rare that people get caught. Just make sure to hide your booze if you see the cops and walk with it in a plastic bag.

The most common way to pregame is to find a spot in one of Madrid’s many parks. Stop into an Alimentación for cheap beer, wine, or liquor as well as a few snacks. If it’s wintertime, you may have to drink in your hostel, but if it’s warm enough, find a place outside. Temple de Bod is a popular choice, and includes both an Egyptian Temple and a beautiful view of the city. Do not drink in Retiro, because it’s policed more carefully and almost all the gates are locked at midnight. Any of the many parks scattered around Madrid are a good choice, so just look for the one closest to you.

Also look online to find out if there are any street parties going on. During the summer many cities, including Madrid, celebrate various Saint’s Days, Pride, or other holidays. These involve massive street parties where bars blast music into the streets and all drinking laws are called off. If there is a party going on in the streets, don’t bother with a club!

Bars will start to liven up around midnight, though some will offer happy hours around 10 P.M. Near Sol things are always lively, but they can get a little pricey if you pick the wrong bar. For a more hipster atmosphere, try Malasaña, just north of Gran Via. The bars in Malasaña range from rock bars to cozy coffee shops that never close. During the weekend, the streets are full of young people making their way from place to place. Wandering between Calle San Bernardo and Calle Fuencarral, you’re sure to find something that suits your interest.

Once it’s getting closer to 2 A.M. you’ll be ready to head to a club. Just don’t call it a club in Spanish! A discoteca is where you go to dance. A club is a brothel. At this point, Sol can be useful, as many of the pub crawls being sold there are worth the money – especially if you’re already drunk. Don’t be afraid to flirt a little with whoever is selling them. It’s not hard to get the price reduced. If you’re not in the mood for a full on pub crawl, you can still find some of the most popular clubs within a few blocks of Sol. You will undoubtedly hear that the best place to be in Madrid is Kapital. The club is seven floors, with different music playing on many of them, and a rooftop smoking lounge. Kapital is certainly an experience, and if you’re looking for a packed dancefloor, it’s the way to go. Still, it probably doesn’t live up to the massive hype, or the 17 Euro entry fee. Instead, check out some of the slightly less famous clubs like Barco or Gabana.

Once you’re inside, take advantage of your free drinks, but try not to buy too much.  Club bars are some of the most expensive drinks in Madrid.  When you’re dancing, don’t be surprised if no one is grinding on each other.  Spanish men are more likely to sweep you off your feet on the dancefloor and wait until you’re home to get dirtier.

Madrid has often been called the “gay capital of Europe”, so don’t hesitate to check out a gay bar, whether you’re queer or not. Chueca is the gay neighborhood of Madrid, and it is definitely full of nightlife. If you’re there during Pride, the streets are filled with live music, cheap alcohol, and lots of partying. Like most gay scenes, Madrid’s is mostly male. Still, for those queer girls looking to dance, Liquid offers a good dancefloor. Unfortunately, Madrid is not immune to the problem of U-Hauling, and you will probably meet more couples than single girls. 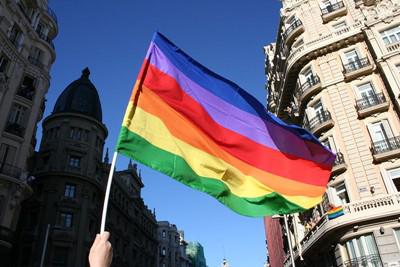 No matter where you go, a night out in Madrid is guaranteed to be fun. Have fun drinking from dusk to dawn, and enjoy all the tinto de verano and sangria that you can get your hands on!