How to Prioritize Your Pleasure

Whether we’re having a steamy one-night stand or hoping to experience a deeper connection with a significant other, we should be able to ask for what we want and shouldn’t feel bad or shameful for it. We, as humans, deserve to experience the full spectrum of sheer ecstasy that comes from an orgasm as the owner of a vagina.

I realize that my experience is as a straight white hetero cis woman who is at home in their body, but each and every one of us is worthy of loving and appreciating our body, right? Even though I have been sexually assaulted and have had many sub-par sexual partners, I have worked long and hard to gain agency over my body and my sexuality. Thanks to going to regular therapy appointments and habitual self-love practices, I’ve learned how to really enjoy the indescribable pleasure that I can feel in my body. But I’m also aware that many of us are not this privileged.

I received a more formal sex education in high school health class when we were forced to stare at graphic images of STIs on a monitor in front of the class to scare us into abstinence. At the end of class condoms and pamphlets about the pill were dropped on our desks and that was it. But never anything about how to enjoy having sex, especially if you have a vagina.

I realize now, that at 27 and as someone who isn’t ashamed to say that they have casual sex, lying to your partner about your orgasm (or lack thereof) is a disservice to not only yourself but also to them and the other people they will sleep with. Sometimes there is so much pressure to just say “yes” because it closes the door on a bigger, and frankly uncomfortable, conversation. Sometimes we lie about cumming because we don’t want to hurt our partner’s ego, don’t know our partner well enough to ask for what we want, and sometimes we lie because we just want to be done with a bad hookup.

Recently, I met an experienced sex and relationship therapist, and she described climaxing to me in simple terms: “an orgasm is just an energy release, like crying or laughing really hard and they’re great for our mental health.” So why aren’t we prioritizing our pleasure more?

Because we’re taught that sex is bad. Especially in a lot of cultures where women and gender non-conforming people are marginalized and not given platforms to speak. They are taught that sex is taboo and enjoying sex and their own sexuality is completely out of the question. Even in places where we have the freedom to talk about it, we often don’t because it can be scary to bring up something considered so taboo.

A good orgasm is going to feel like the muscles in your vagina gradually and intensely tightening and tightening and then BAM!… there will be a release that shudders through your entire being. Enjoy it because you deserve it! I recommend trying not to clench and just letting the wave of electricity flow through your body.

Now go report back to your partner(s) and let them know what you really want. Chances are they’ll be super turned on that you’ve taken the time to DJ solo. And let’s work to have conversations with friends, colleagues, partners, and whoever else you feel comfortable with talking about sex with so we can prioritize our pleasure. We deserve and need more orgasms.

About the Author: Aly Nagel 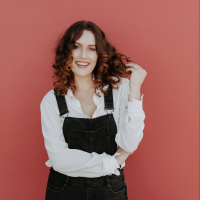 Hi, I’m Aly. I’m on a mission to help empower people with vaginas everywhere to feel comfortable enough in their bodies to experience orgasms and demystify how to have them. I’m a born and raised millennial Californian with a wildly passionate heart and care just as much about avocado toast as I do about smashing the patriarchy. I also work to spread messages of self-care, body positivity and am an overall hype woman on my brand page Don’t Call Me Pretty. Follow me on Twitter and Instagram. Feel free to DM me with ideas and feedback.