It is commonly accepted that it is the man’s role to pursue sex and the woman’s role to decline it – until date three at the very least. The idea that a woman might want sex for her own pleasure, rather than using it as bait for a romantic partner is anathema to many. (Sex between women is, of course, brushed under the carpet in mainstream media as it doesn’t fit the convenient heteronormative theory.) 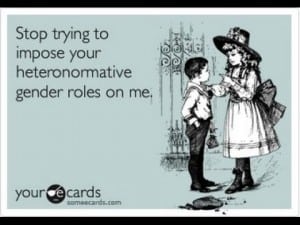 The idea that men are more sexual than women is a societal belief rather than fact – something that becomes clearer when you study how this perception has changed over time. Aristotle’s Masterpiece (1684) stated that women ‘Have greater pleasure and receive more content than a man . . . whereby she is more recreated and delighted in the Veneral act.’

This was based on the belief that both men and women ejaculated in order to procreate – the woman internally, the man externally. Modern science has found that climax increases a woman’s chances of getting pregnant, so this is more forward-thinking than it may seem.

And it is far from the only historical text to suggest women are just as sexual as men – if not more so. Jenny M Bivona says, ‘Western culture’s treatment of female sexuality, beginning with the story of Adam and Eve, is a history of suppression, incomprehension, suspicion, and denial. This history includes the male fear of women’s insatiable sexual appetite, the myth of vagina dentata, the presumed linkage between female witchcraft and wanton union with the Devil, and the Victorian counter-assumption that women are asexual beings (Allgeier & Allgeier, 2000; Baumeister & Twenge, 2002).’ Stick a pin in a timeline and women will be presented as either sexual and dangerous or sexless and virtuous. Both of these are equally untrue – and equally damaging.

In painting men as sexual and women as sexless, female sexual pleasure is negated and sexual women are placed outside the norm. Slut-shaming is used to justify sexual women’s rape, because ‘nice girls’ wouldn’t wear short skirts, flirt or want casual sex. If a woman does, she is considered to be ‘up for anything’.

However, the inverse of this myth is just as harmful: painting women as sexually voracious and men as powerless to their desires has also been used to justify women’s rape. Garthine Walker argued that historically, representations of women as libidinous made it hard for women to demonstrate or describe rape. ‘There was no popular language of sexual non-consent upon which women could draw.’ And these beliefs can still be seen reflected in the way that women of color, working-class women and trans-women in particular have been hypersexualised, often as a way to justify their sexual exploitation and abuse. Both positions validate the virgin/whore myth. Both positions help society have an excuse for rape. And in both positions, that excuse is ‘women’. 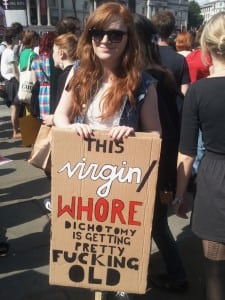 We need to put the virgin/whore myth to bed once and for all and admit that female sexuality is just as diverse as men’s. In reality, some women are asexual, some are hyper-sexual, and some fall in between these two points. The same is true of everyone. Defining someone’s sexuality based on their gender (or any other singular trait) rather than assuming everyone is different and taking people on an individual basis places expectations and limitations on our sexuality – and opens the door for judgement, stigma and worse.

Extract taken with permission from Garden of Desires: The Evolution of Female Sexual Fantasy ($15, Black Lace). Get it at Amazon here.