“I am a wife, a sister, a daughter, an entrepreneur and I am allowed to be sexy.”.

In 2016 Kim Kardashian said this after being shamed for a nude selfie she posted online, and while I don’t personally use Kim K as daily inspo, she fucking nailed it.

Expressing sexuality (or even just being naked without expressing anything) has become a form of activism. Our bodies are something that ignites debate and divides opinions. How does the act of physically existing become a topic of international importance?

We are exhausted by the patriarchy. And a funny thing happens when you get really tired. You stop giving a fuck. Millions of people have stopped giving a fuck and are unabashedly posting photos of their naked or partially naked bodies existing in the world. And this has kicked up the proverbial dust for many people who see it as nothing more as an attention-seeking tactic.

But, can posting a partially nude photo benefit yourself and the world? There’s no doubt it brings more joy to the internet. I, myself, derive much joy from all of the badass naked humans in my feed. But can it also create a bigger more important change to a struggling society? Economically? Emotionally?

Absolutely. Nudity rouses the senses of the world. Creating lust, fear, anger, disgust and a big fat mirror showing us our own personal hang-ups and insecurities. And these emotions can change the world! Here are a few favors you’re doing for the earth every time you expose your body online.

Think of all the people Facebook and Instagram will need to employ to police their “no sexy” policy. By showing your body (even just your midriff), you are creating hundreds of jobs around the world. If we all continue to post our sexiest selfies, there’s no way they’ll be able to keep up with the workload. More and more people will need to be hired until the entire world is working at Facebook. Just think, every time your photos get removed or your account gets banned, you’ve helped someone get paid. You’re creating more jobs than the Orange One!

Instagram has become a hostile place for more than just sexy selfies. Even fitness models and athletes are under attack for photos that expose their stomach (mostly those who identify as female or gender queer). Instagram won’t outright ban them from the platform, but instead, they take a more insidious approach, by bumping them down the algorithm. Their posts won’t even show up in the feeds of their followers. This sneaky, underhanded control over content is more concerning than being banned. They’re enforcing their laws without notifying you. They decide whether or not your body is fit for public consumption. And trans bodies and bodies of color are the first to be under fire.

Give an Online Troll Purpose

When you show your nips, reveal your fat, expose the color of your skin, have a job as a sex worker, or exist as someone who doesn’t fit gender norms; you give purpose to an angry slut-shamer. They spend their whole lives searching for evil hoes like you. You can help them accomplish their goals by giving them the fuel to write “Burn in hell, whore!” or “You’re setting women back 100 years.” It’s like a Big Brother/Big Sister situation. You’re giving back to the community by occupying these whorephobic shits so they can’t spend their time doing physical hate crimes! Good for you!

The era of he-who-shall-not-be-named has created a safe haven for misogyny and hate crimes. Those who kept their racism under wraps can now find powerful allies to fuel their darkest thoughts into action.

Although I never want anyone to put themselves in physical or emotional danger (always do what you need to do to stay safe), now is not the time to hide our bodies for the sake of others. Keep showing off your sluttiest, freakiest, weirdest, sexiest self. We need to make it ok for future generations to be whole-heartedly themselves and teach them that diversity is the path forward. And the only way to do that is to publicly & unabashedly live your best life for all to see.

Once your unencumbered flesh is out there for the world to see, you suddenly have a lot less baggage holding you down. And by baggage, I mean the heavyweight of shitty friends and family that you never wanted around in the first place. Suddenly, Aunty Geena’s racist rhetoric isn’t showing up in your feed? And what happened to that guy you went to high school with who always posts about Men’s Rights? Weird…I guess they unfollowed you. You’re now both free to move on with your lives. And without their xenophobic, gaslighting word vomit; who knows what you’ll go on to accomplish. You’re free to live an untethered life. And so are they! Only ‘on brand’ followers who post fire emojis on your butt selfies remain!

Friends and family can be tough. Sometimes it’s harder to let in the people you love the most. Especially if you know that showing your true self will lead to shaming or scrutiny. But, I promise, the weight that is lifted once you decide to express yourself as a sexual being, is so worth it. Sometimes people can surprise you with their loving acceptance. But, if they don’t, that can be a good thing too, in the long run. Don’t be afraid to seek counseling if a loved one doesn’t react to your lifestyle the way you wish. It’s okay to be affected by people, even if they’re jerks.

There are so many wonderful ways showing off your human skin can change the world. You’re doing a service to your country by posting as many naked photos as possible. Do your part. Get out there and show everyone where you stand, especially if where you stand is nude in front of a full-length mirror.

Right now, celebrating your body is one of the purest forms of activism. The idea of morality has become an attack on sexuality. Show the world that you are more than a tool for male orgasms and procreation. Empower other people to feel good about who they are and let go of the generational shame that holds us back from embodying our true power. Your sexuality is feared for a reason. And while expressing your body and sexuality may not save the economy, it still might save the world.

About the Author: Jennifer Doan 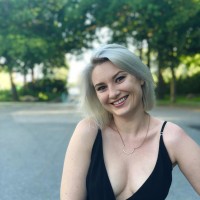 Jennifer Doan is a sexual empowerment coach, host of the podcast Taking Back Slut and the creator of Slut School, a course to teach women how to use the power of their sexuality to create lives that turn them the fuck on. Jennifer is committed to helping women connect to their sexual power in a way that feels safe and comfortable to them. Connect with her on Instagram for sex rants and unapologetic nudes.