I don’t remember when I first decided I identified as a feminist. I’m sure I went through that awful “I’m not feminist, but…” stage – most of us have, despite the fact that there is no reason to feel guilty about wanting equality. Regardless of when I officially had my feminist epiphany, I feel like deep down, the ideology was always ingrained in me. Maybe it’s because I read so many books and watched so many shows with strong female characters growing up – and hell, I still do! Here are a few of my favorite fictional feminists and those of other SGP writers as well! (Thanks to all those who contributed with ideas!)

Just like the actress, Emma Watson, who portrays her in the Harry Potter film series, Hermione is a feminist. Not only is she a total badass who helped bring down the Dark Lord while staying at the top of her class, but she’s hella intersectionalist. Despite the fact that she was raised as a Muggle, Hermione takes Muggle Studies classes to learn about Muggles from a different perspective. She uses her position of privilege to help those without the same advantages, too. Her desire to free House Elves was a little misguided, perhaps in the vein of “white feminism”, but she means well. As for the patriarchy, this is what Miss Granger has to say:

Speaking of fictitious feminists, Miss Bellum from The Powerpuff Girls comes to mind. When you’re first introduced to her character, she’s framed as a stereotypical beauty — we don’t even see her face and are instead met with luscious curves that distract many characters on the show. When we hear her voice, however, it’s evident that Sara Bellum’s super power is her intelligence. She’s obviously the brains of the Townsville mayoral department. Alas, Miss Bellum lives in a patriarchal society and is a secretary, though she’s clearly deserving of the mayorship. Bellum proved to so many young viewers that it’s possible for women to be sexual, intelligent, and successful. 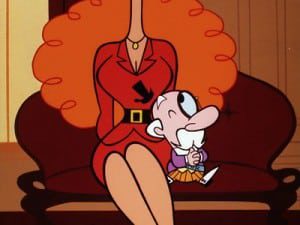 From Cartoon Network over to The Disney Channel, Penny Proud from The Proud Family is also an amazing feminist! There are actually a ton of strong women characters on the show, including the many women in her life who supported Penny when she decided to try out for her school’s football team (where she faced a lot of objection from the men in her life). Penny and her family also practiced their African American culture, celebrating Kwanzaa during the holiday season. The Proud Family was truly a progressive show for its time and can still be considered such today! 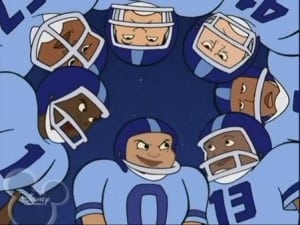 Cory’s love interest on Boy Meets World was so much more than just the main character’s girlfriend. Topanga always spoke her mind and absolutely did not care what others thought of her. Topanga never has a moment throughout the entire series where she lacks in self confidence, from her middle school days in the pilot episode to her adulthood in the final season. (And to her days as a mother on the current sequel series, Girl Meets World!) Topanga always listens to her heart, no matter what others think. Maybe waiting until marriage seems a little conservative in today’s world – many might consider it the opposite of feminism – but Topanga doesn’t play by the rules. She listens to her heart and does just that, choosing to wait until the moment that is right for her and her relationship. 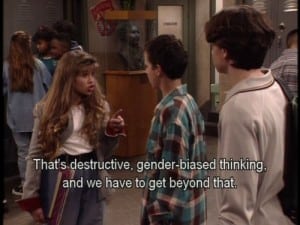 On another teen sitcom of the 90s, Saved By the Bell, Jessie Spano was spouting her feminist beliefs to anyone and everyone. She constantly fought to make sure she was treated as an equal and desired the same for her besties, Lisa and Kelly, even if they didn’t quite agree with her beliefs. Later, Jessie ended up dating misogynistic A.C. Slater, which was a little weird considering her beliefs, but maybe it was to prove that feminists can still love and enjoy men, even if a lot of them are kind of total chauvinists? Maybe? 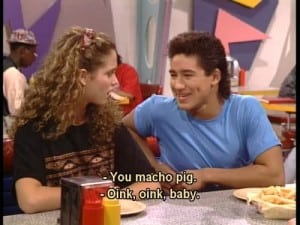 Especially during the early seasons, Lisa Simpson from The Simpsons was the embodiment of feminism. She’s not a fan of things like Barbie dolls (Stacy, in the series), believing that they encourage girls to strive for a rather particular image of success. She stands up for her fellow women, and when she wins the title of Springfield’s Junior Miss Beauty Queen, she strives to make the city a better place rather than just accepting the title and sitting pretty. 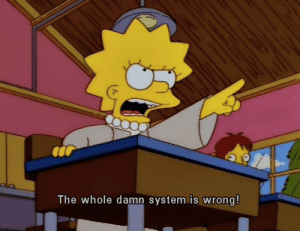 Though the title character from Daria never officially identified as a feminist, there’s little doubt as to her being one. Her “give no shits” attitude made it easy for her to not care what was popular or acceptable. Daria did what she wanted to do, dressed how she wanted to dress, and befriended who she wanted to befriend. Daria proved that fitting into a mold isn’t necessary to be “cool.” While those at Lawndale High might not have agreed that she was cool, Daria’s apathetic, stick-it-to-the-man voice still rings true.

As if the love between women on Gilmore Girls wasn’t iconic enough – what a fabulous mother/daughter relationship! – Rory was the perfect young feminist for many teenage viewers to look up to. I could go on and on about this show: A single mother, a diverse cast, …but there were so many little things about this show as well. Rory and Lorelai both dated, but it was apparent how great they were on their own as well. And while Rory and Paris were certainly a little competitive with one another, that didn’t stop them from being friends. No girl hate here! 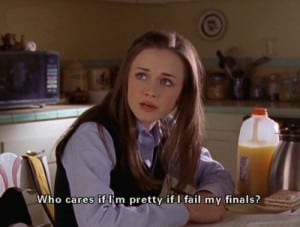 Let’s start a Disney set with Meg from Hercules. She was a total babe and a killer feminist. She was a damsel in distress, but that didn’t mean she needed saving. Meg manages to leave a crappy situation and chooses to be with Herc, working hard to overcome a past that’s left her skeptical towards love. Go Meg! 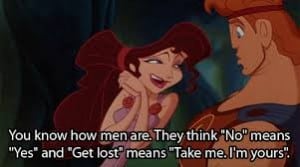 Tiana from The Princess and the Frog is, wow, an amazing feminist for her time! She has a dream to open her own restaurant and doesn’t let anything stop that, even being turned into an amphibian! (Also, for someone who spends most of her screentime as a frog, Tiana has the most costume changes of any Disney princess, which in itself is pretty impressive.) In the end, Tiana gets together with a prince. But does she sail off to his country to live the easy life and rule? Nope! Nothing, not even love and a royal title, will stop her from realizing her goals. And Naveen is an absolute babe and perfect boyfriend: he supports Tiana 100%!

She saved China. Need I say more? As a woman, Mulan couldn’t join the army to fight the Huns. Her father had to, but she couldn’t stand to see him go, knowing that he would probably face death. Mulan got down to business: she dressed up as a man and went to war in his place. Her bravery and determination led her to become a great soldier and save China. The title character of Disney’s Mulan is a legendary warrior whose story has been told for centuries. If that isn’t #goals, I don’t know what is.

Time for another set: Sex and the City! We can probably consider all four of the SATC ladies feminists, but let’s stick with the strongest examples. Miranda completely slaughtered the stereotype of being a mother. Having a family didn’t mean she had to sacrifice her career. In fact, she was the breadwinner in her relationship and her husband became a stay-at-home dad! Miranda was infallibly loyal to her friends and always told it like it was. 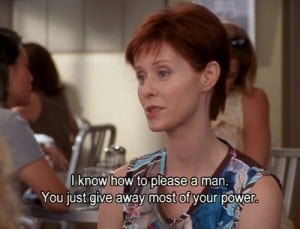 Was there ever a female character more sex positive than Samantha Jones? Samantha loved sex and eventually found love, too. She knew what she wanted out of her relationships and she got it! What’s most inspiring about Samantha goes beyond the fact that she beat cancer. The lady who undoubtedly put the “sex” in Sex and the City loved herself, which is the most inspiring message of all!

The Parks and Recreation character has a wall of inspirational women. She lets nothing stand in the way of her goals, believes (and proves) that anything men can do, women can also do, and completely shuts down mansplaining. When I grow up, I want to be Leslie Knope. 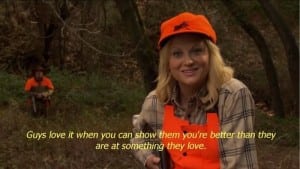 Actually, I lied. I always wanted to be a teacher, so Ms. Grotke is who I want to be when I grow up. The fourth grade teacher on Recess taught her class history like it was, encouraging them to think from the perspective of people other than those who wrote their textbooks.

What’s great about the title character from The Disney Channel series is that Kim wasn’t just a feminist in the field. Sure, she was a kickass, fearless action hero, but there was so much more to her than that. At school, Kim was undeniably popular – stereotypically so, even. She was a cheerleader, and damn good at it. (And if you don’t think cheerleading’s a sport think how much it prepared Kim and got her in shape for kicking ass as a superheroine.) But despite her popularity, her best friend was your typical nerdy guy. She didn’t let the opinions of others stop their friendship or eventual romance. 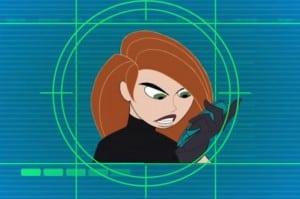 The Mother of Dragons, the Breaker of Chains. While there are a lot of kickass feminists on Game of Thrones, the Khaleesi takes the lead. (But let’s pay homage to a few others: Sansa is both feminine and strong in her beliefs and takes some serious shit; Arya embraces the fact that she doesn’t enjoy stereotypical “female” activities; and Brienne of Tarth is a knight with a deep-seated sense of loyalty). Daenerys is the queen in a sea of kings fighting for the Iron Throne, and on her way she’s freeing slaves and siccing her dragons on creepy misogynists. You go girl!

Who are some of your favorite feminists from books, television, and film? Did I miss anyone who is consistently passing the Bechdel test? Is someone on this list more of a problematic fave than a feminist icon? Comment with your favorite fictional feminist!