Busting the “Sex is Sinful” Myth

It is commonly believed that religion and sex positivity cannot go together because sex is an inherently sinful act. Some people use religion to justify shaming those who are sexual – women in particular. However, religion need not be a barrier to sex positivity. Indeed, sex and spirituality have long been linked, whether through rituals, celebrations or the written word (“Song of Songs” in the Bible is particularly erotic). In 1876, Victoria Clafflin Woodull espoused the idea that the Garden of Eden story was an intricate symbol of the human body, urging, “Let the sexual act become the holiest act of life, and then the world will start to be regenerated and not before.” More recently, Kelly Brown Douglas says in Sexuality and the Black Church: A Womanist Perspective, “Only when the taboo of sexuality is discarded will Black women and men be free to experience what it means to wholly love and be loved by the Lord.” (p143, Orbis Books, 1999). Many spiritual leaders across many different religions now preach sexual tolerance, and are moving away from bigoted views. Though clearly our sexuality has been hugely influenced by religious dogma over time, being religious does not have to mean being sexually oppressive. 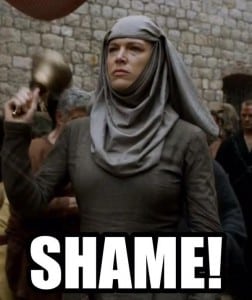 Accepting the myth that sex is sinful can lead to sexual guilt, repression and, at its worst, the murder of those who transgress from accepted norms. Abstinence-based sex education increases unwanted pregnancy and STI rates, meaning people may die as a result of archaic religious laws regarding contraception use. Some people turn to suicide rather than admit their true sexuality or gender to religious family members or their church. In addition to these chilling situations, people are killed as a result of intolerance bred by some branches of some religions, whether directly or indirectly. In short, intolerance towards sexual diversity can kill, whether perpetuated through religion or other means. Deeming sex to be a sin also paints those who are sexual – particularly women – as sinners. And that brings us back to the virgin/whore myth once again.

Though some may consider others’ religious practices to be an act of oppression and urge everyone to reject religion and/or shout about sex, there is no shame to be had in wanting to keep sexual expression as a private thing, or a matter between a committed couple. There is no shame in wearing clothes that reflect your view on modesty or that carry special meanings for you. It is only where religious practices cause harm or death – whether through making people have surgical procedures against their will, banning them from using condoms, or insisting that everyone has the same sexuality – that religion clashes with sex positivity. If we could accept that different people have different beliefs, and respect that everyone has a right to choose their own moral code, perhaps we could get rid of the stigma attached to sex, too – and, in so doing, save people’s lives. Whether this is possible, given the damage that religious wars have caused historically and the baggage that comes with that history, is something that only religious leaders can decide.

Extract taken with permission from Garden of Desires: The Evolution of Female Sexual Fantasy ($15, Black Lace). Get it at Amazon here.