How to be an Ice Queen during a Breakup

So ya wanna be an Ice Queen…

You’ve been through plenty of pain, feelings, and crying. You’ve had those nights of not sleeping, listening to Oceanlab, and staring at the ceiling whilst tears run down your face. Most of us have felt the sickness in your stomach when the person you thought was your life is no longer anything but a history; a painful memory. If you haven’t, either fuck you or HAHA just you wait for the day when someone puts your little fluffy, naïve heart through a shredder. I know that for me, it was a slow process: more like having all I was worth and everything I felt cheese grated over a long period of time, eventually leaving me with nothing but a pile of shreds.

I have never cried so much, felt so pathetic, and vulnerable as I had when going through heartbreak. It took me a long time to re-invent the way I was, and how I acted. The criminal that crushed my feelings was a constant part of my life; even when I was sleeping with other guys – even through another relationship. He was a consistent speaking, walking reminder of my pain. To make it worse, throughout my “healing” period he would still talk to me, and I would enjoy talking to him. I had never felt anything stronger than a school girl crush for anyone else, which usually vanished once I’d discovered that maintaining an erection seemed to be a hard task (it wasn’t me, I’m hot stuff). I would call “situationships” with guys off because I ended up being disgusted by them, resenting them for just being themselves.

Eventually, I realised that I wasn’t “in love” with the guy who crushed me. I was just scared of being alone. I didn’t think anyone would know me as well and make me feel as happy or as comfortable. I didn’t think anyone else would want to wake up to my spotty dribble face in the morning, or would, whenever I was around, just want to always be holding me and throwing me around (in a loving nice way) like I was as light as a feather. I never thought I would ever be able to find someone who when our skin touched It felt like electricity.

I was wrong. See ‘The Five Stages Of A Break Up” 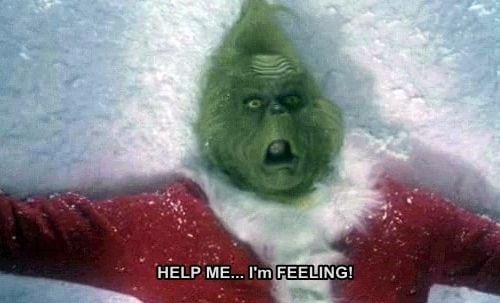 So ya wanna be an Ice Queen? I can give you a few pointers. On my resume I have that I have been told by many that I am ‘Evil,’ and if I’m honest I love it. I reply with a sassy, “Thanks!” It’s a compliment; trust me – especially if it’s coming from a pathetic member of the male species. So for all my gals who are sick with feelings and emotions and falling for that guy you slept with once and now he won’t call you back; here are my tips on how to be an Ice Queen.

1. Disconnect from your emotions

There are a few things you can do. You can watch romantic comedies and pick out everything that is illogical and simply solved. Be critical; no guy is going to build you a house. Hopefully, no guy will ask you to lie on a road, it’s fucking dangerous! No guy will have the determination and patience to go on 50 consecutive dates, knowing you won’t remember him after every 24 hours. You don’t have an employee to marry to keep you in the country. You can’t fall in love over one night: it’s irrational.

Your conclusion should be you realising it isn’t real and will most likely never happen.

You could just use scissors or garden shears to chop the connection between you and your emotions. It’s easy really.

2. Stay away from chains

Boys are only after ONE THING. Experience tells me that for some guys, all they want is a fucking relationship. Do not settle for mediocre. Do not give yourself up on a paper plate for him to piss on. You do not want to be committed to this guy; it will end up with him being possessive, he’ll become a thorn in your side or an irritating itch. You don’t commit to anyone but yourself. You don’t belong to anyone but yourself: there is no one that deserves you.

3. Believe there are no happily ever afters

4. You are a BAMF who don’t take no crap from nobody

Cute, innocent people who get walked all over need to be pushed into ferocity. You need to tell yourself every morning that you are too fucking fierce to be dealt with. You can take care of yourself, you don’t depend on anyone else but yourself. Your happiness is under your control and you know yourself enough to know what you like and what you don’t, and how to make yourself feel good. You are one sassy bitch who’s too hot to handle, take that resting bitchy face to the next level and own it.

When Yul Brenner says ‘crap,’ what he actually means is bullshit and hassle from any guys who aren’t worth your time. Emotions, feelings, insults – the lot, it isn’t even worth the air you blow out of your nose, or the eyelash that just fell off (permission to cry). But no man with an ego bigger than his dick, no man/woman at all for that matter, is worth your tears – because let’s be honest, if you were to cry, it would freeze up and you’d probably have to go to the doctors and explain why you have a frozen eyeball in the middle of July. Embarrassing #IceQueenProbs

5. Invest in some white face powder

You have to look the part. Alternatively, you could avoid the sunlight at all cost and only come out when darkness falls. But all white everything, a hint of blue glitter, silvers and metallic streaks. You got it.

So After you have successfully severed with all emotion, you can begin to break hearts and freeze your way through the fish pond. Unapologetically being yourself, and feeling no sense of remorse for the wounded man hearts you squish.

Don’t forget that this doesn’t make you a bad person, it just makes you an Ice Queen.