The Other Side of the Sexual Double Standard

It’s important to remember that respect goes both ways, and we need to give as much as we expect. Here are three of the (often overlooked) ways that we may be unintentionally projecting the sexual double standard on men. 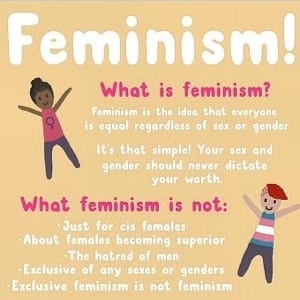 If we want to fight the stereotype that women cannot be interested in sex, we must accept that men aren’t always interested in sex.  They have plenty of other interests, too! When you hit up your guy for a hookup and he turns you down, don’t take it personally; maybe he just doesn’t feel like it. And if he doesn’t feel like it – there’s nothing wrong or un-masculine about that. Men have just as much of a right to say “no” as women do, and are in no way required to be ready for sex at the drop of a hat. Similarly, if you approach a random guy at the bar and he’s not feeling your flirting, don’t write him off as a loser. You’re a hot and confident lady, but not every guy has to like you; after all, you’re probably not interested in every guy who has ever hit on you. There’s a common belief that men will put up with just about anything if it results in them getting laid. Of course, this is true for some men, but it’s true for some women as well! We have to stop assuming men suffer from some kind of “sex tunnel vision” that prevents them from thinking or wanting anything else. 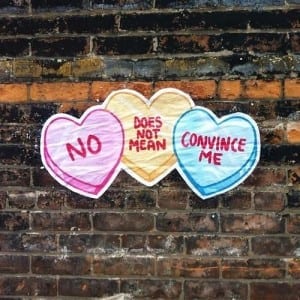 3. Thinking virginity is something to be embarrassed about.

The greatest insult people try to throw at girls is accusing them of promiscuity: slut, whore, skank, the list goes on. But when they want to insult a guy, they call him a virgin and tell him that he’ll never get laid. This is not okay. We want women to be able to break free from the sexual double standard and have sex with as many partners as they want to, but by associating male virginity with feeling ashamed or inadequate, we just look like hypocrites. The slutty girl lifestyle is all about being accepting of people’s sexual appetites and choices no matter where they fall along that spectrum. That’s the entire basis of sex-positivity.  Nobody should ever feel bad about any aspect of their sexuality, regardless of their gender. 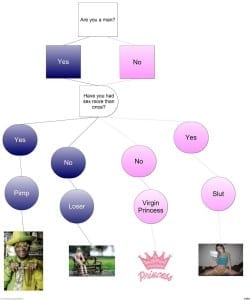 (This mentality is NOT okay)

Throughout our lives, women go through a huge amount of discrimination based on our sexual choices. It’s indisputable that women have suffered more due to the sexual double standard and inequality than men have, and we still have a long way to go in the journey towards eliminating it completely. I’m not trying to down play that. But, to successfully accomplish our goal of equality, we need to be aware of ALL the different ways the sexual double standard can affect people. Just as women have every right to be sexually active, men have every right not to be. Next time you complain about this particular issue, stop and take a look at yourself, then ask this question: Are you helping to eliminate the double standard – or perpetuate it?