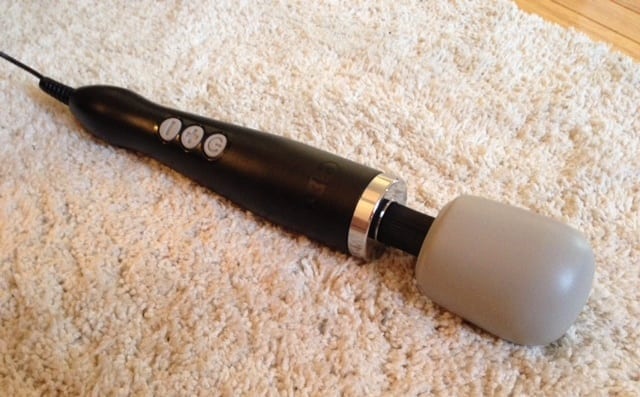 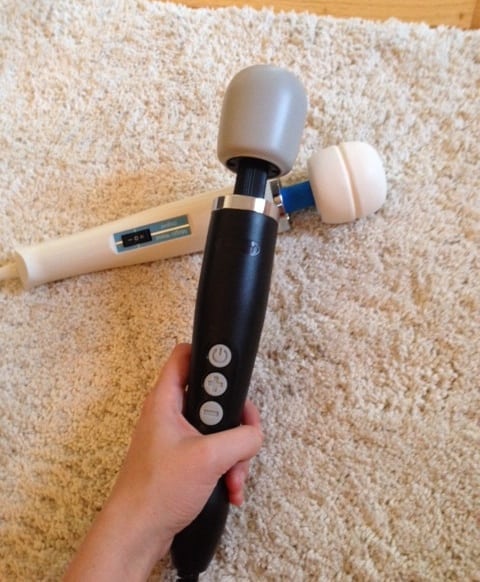 The head of the toy was once made of PVC (a non-body-safe material), but is now, after this review was initially written, the head is made of body-safe silicone, a major upgrade! Silicone is long-lasting, easy to clean, and is not porous, so won’t harbor bacteria. You can easily wash it with soap and water or your favorite toy cleaner. Just be sure to use a water-based lube instead of silicone-based, as silicone could degrade the material. 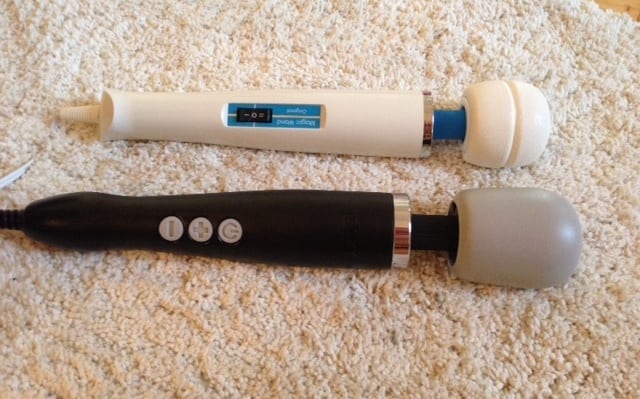 Both are powerful, but I much prefer the controls of the Doxy massage wand over the Hitachi. Rather than having two speeds – high and HIGHER – the Doxy has a variation of 20 speeds, ranging from low to high. The lower speeds are deep and rumbly, while the higher speeds are faster and only slightly less rumbly. You can control them using easy “up” and “down” buttons to find the perfect speed. I love the variation, and gentle easing up from lighter to more intense with each click. Like the Hitachi, desensitization is a total myth. At its highest speed, it’s slightly less loud than the Hitachi – and at its lower speeds, it’s about as quiet as my other 4 or 5 bee vibes. It could definitely be heard through a door, but it doesn’t make you go deaf when using it. It’s not nearly as loud as one would expect!

Honestly, I’m a bit conflicted about the Doxy toy. I really do prefer the Doxy vibrator over the Hitachi. The vibrations are much more pleasurable for me, especially because I can set it to lower settings before going all the way with its highest intensity. I think it’s a fabulous sex toy for someone that craves power, but also wants some more variety than a simple two speed. I can’t say it’s more powerful than the Hitachi, but it’s definitely more pleasurable for me. I haven’t tried all the massager wands out there – but this is definitely one that will stay up there in my favorites for a long, long time! That is unless it starts leaking… If you have the cash to spare and love some powerful vibrations, the Doxy massage wand is a wonderful choice!

Lovehoney for $139.99.
Free shipping on orders over $40!
Earn points for free gifts as a member.
Get 10% off your entire order with coupon “SGP”
Pair it with our favorite lubricant, Wicked.
Free returns for 30 days as a member!

SheVibe for $110
Free shipping on orders over $75.
Pair it with our favorite lubricant, Wicked.