The authentic Magic Wand Original scoffs at other vibrators, maintaining its position as the all-powerful. Other vibrators merely quiver in comparison. If my toy box was in a cheesy teen movie, all my vibrators would stop talking and turn to stare as the real Magic Wand massager slow-motion buzzed into the room. 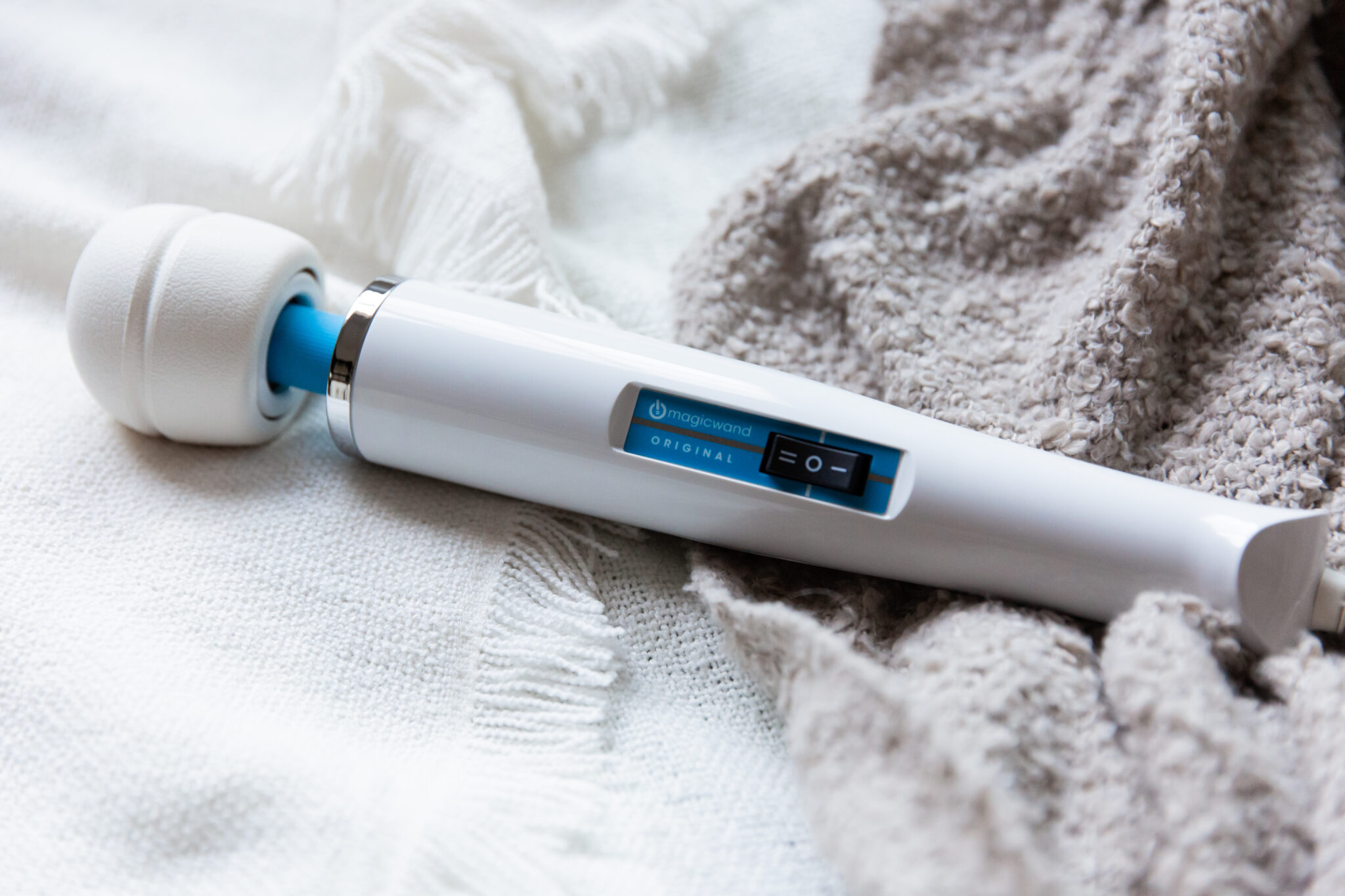 How Good is the Magic Wand?

The Magic Wand massager is, in a word, insane.

It is a full foot long, nearly the length from the top of my palm to my elbow. Its vibrating head is 2 inches tall, 2.5 inches across, and 7.5 inches around—about the size of a tennis ball. It’s not meant to fit inside you but, rather, to externally massage your sore muscles, shoulders, back, and… oh yeah, if your vulva and clitoris happen to be sore, it’s really great at that, too.

It’s entirely made of plastic on the outside, aside from a small metal rim along the handle which your hand doesn’t even have to touch to control the vibrations. The last of these benefits is the vibration and power… which, oh my GOD. How is this even legal? 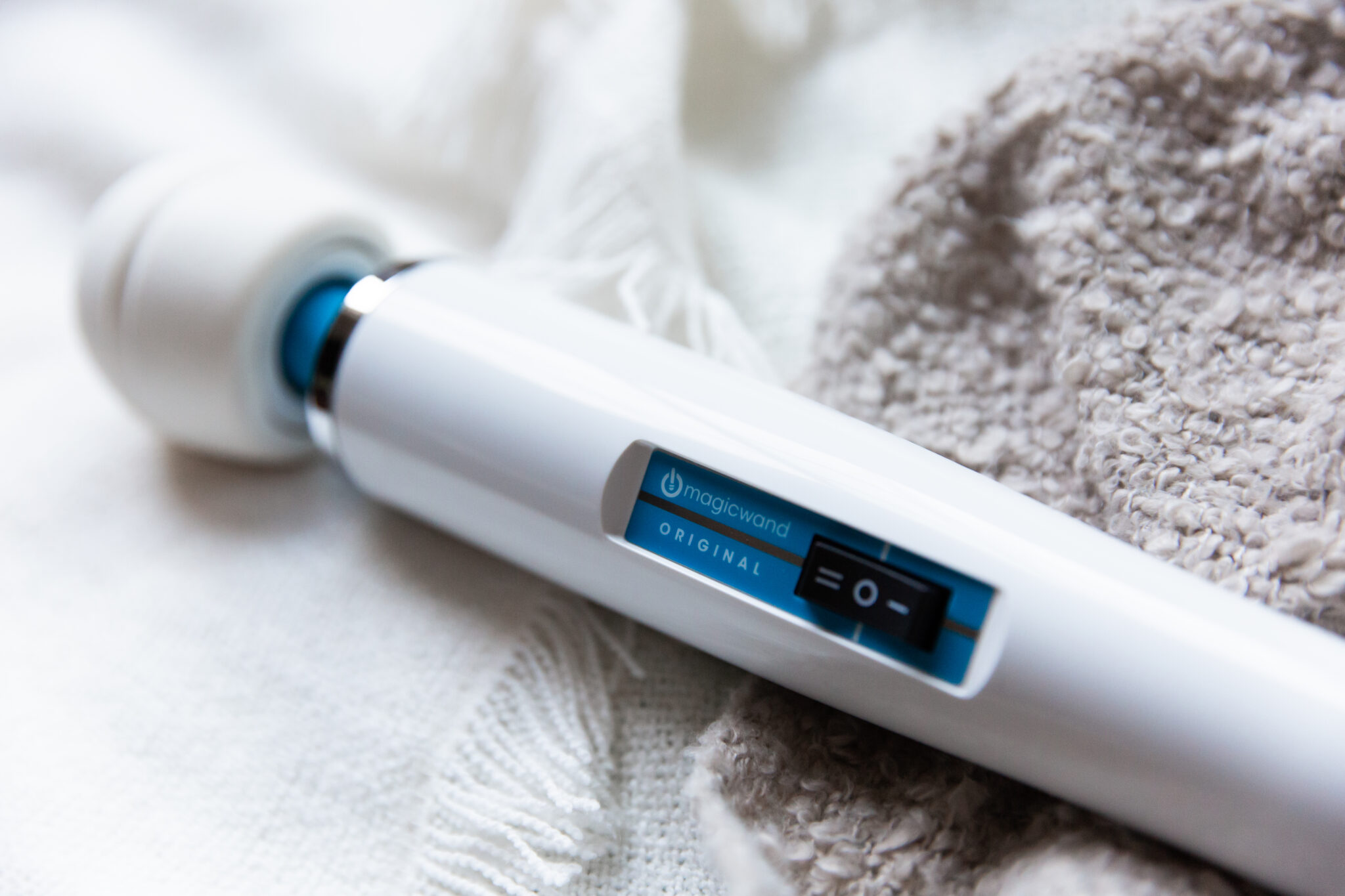 How to Use the Magic Wand Original

The vibrations are so powerful that the Magic Wand actually needs a cool down period of 30 minutes after just 25 minutes of use. (Not that you’ll need to use it that long to orgasm. I christened it with its first orgasm within a minute… and then another… and another after that.)

My partner used it on me, and gave me so many unrelenting, tormented, and forceful orgasms that I cried… cried… from the shock of that much pleasure. That’s never, ever happened to me before. 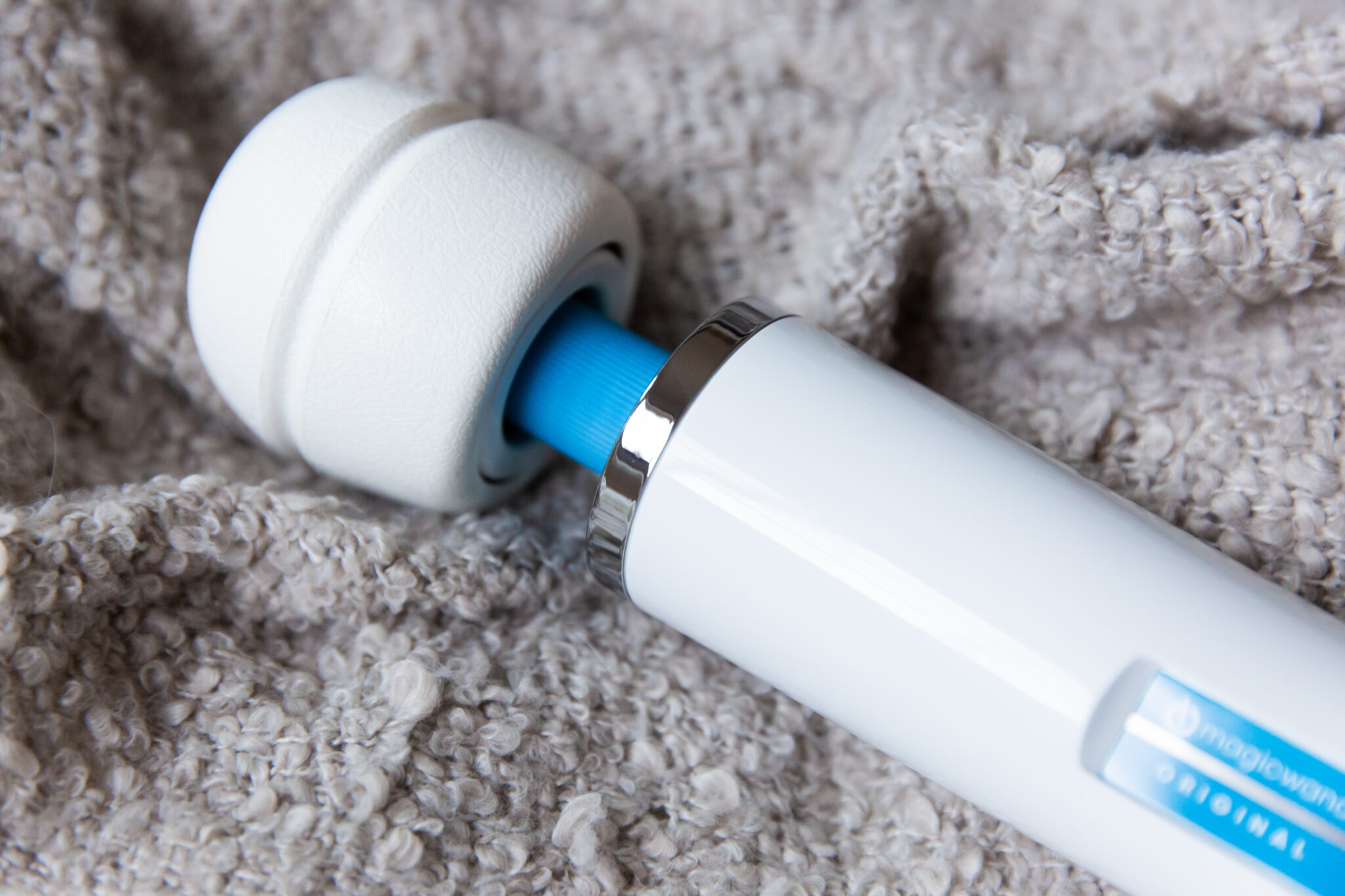 Can You Hear the Magic Wand Original in Another Room?

Can Vibrators Desensitize You?

Those with vulvas have wondered many things about vibrators – and specifically the Magic Wand. Questions like, will it make you go numb? Can it ruin your clitoris / orgasms / sex forever? Can it make you unable to orgasm other ways? Will it damage you forever?!

The short answer is no.

Vibrators cannot permanently damage or desensitize you (unless it’s a really terrible, faulty vibe that has some kind of explosion on you or something). But, just like any other sensation, your body and mind can get used to vibrations. So much so that you “retrain” your brain to get off with them. Just like Pavlov’s dog (drooling when a bell rings at the thought of food)—vibrators can act as a trigger for orgasm. 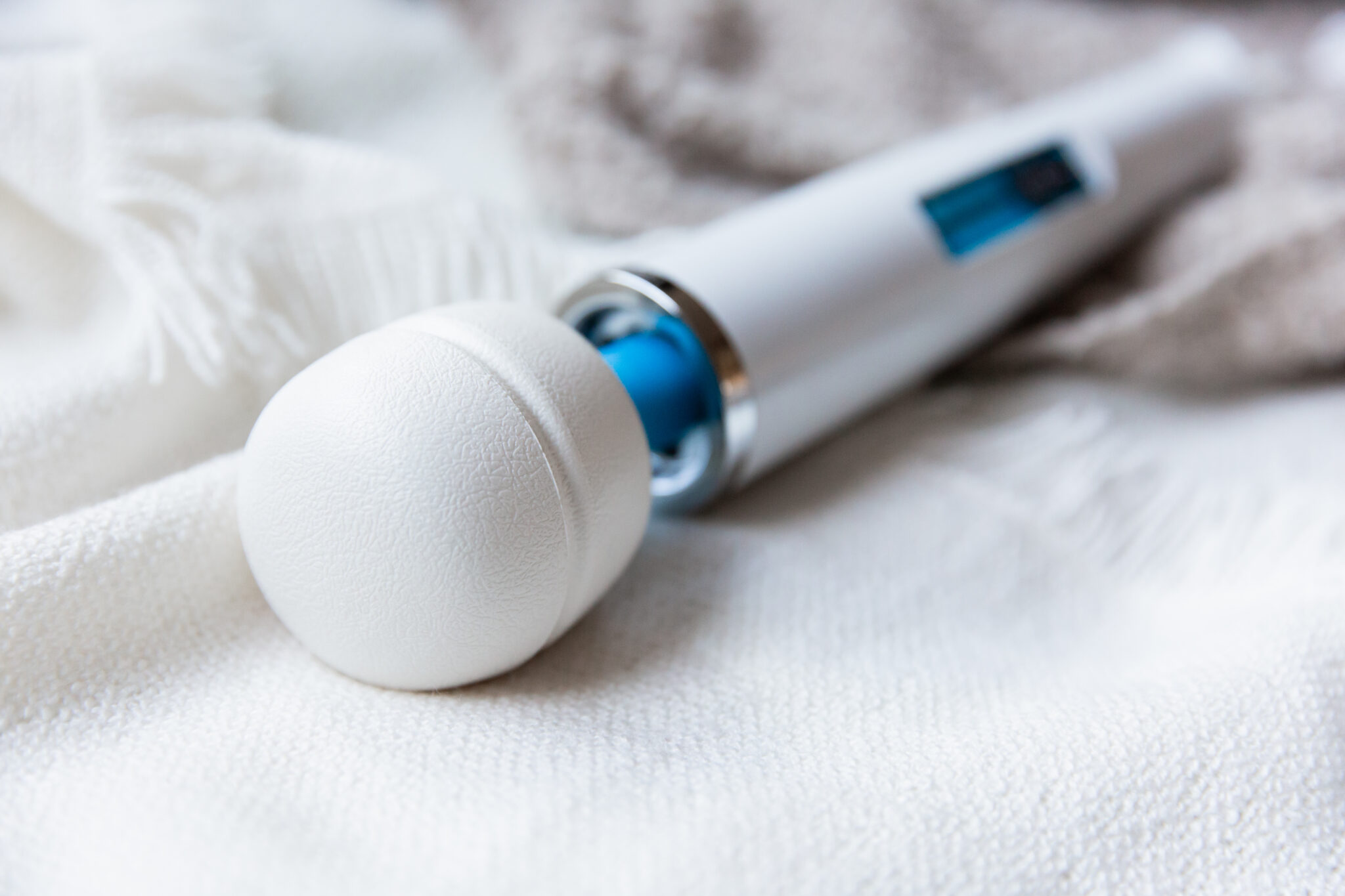 How Intense is the Magic Wand massager?

This classic vibration is known to make clits orgasm over and over again, at will, with hardly any effort at all. In fact, many folks with vulvas who have never had an orgasm before in their life thank the Magic Wand massager for giving them their very first orgasm, and it continues to help them for years to come. For many, orgasming is a struggle. Having the Cadillac of vibrators at your disposal can bring that mythical fantasy into reality if you’ve been struggling to reach it. If you’re the kind of girl who’s become frustrated with your fingers, and even other toys, the powerful vibrations of the Magic Wand just may be enough to finally bring you over the edge.

For some people with vulvas, this vibrator will be way, WAY too much. I can imagine that, as a virgin to sex toys, my vulva and clitoris would have had quite a shock if this was among the first toys to touch my sensitive bits. If you’re a person whose iPhone is about the level of vibration you can handle, steer clear of the almighty Magic Wand. BUT, I think this vibe has wonderful potential for beginners if, and only if, they have tried other vibrators before and continually find it difficult to orgasm. This classic vibration is known to make clits orgasm over and over again, at will, with hardly any effort at all. 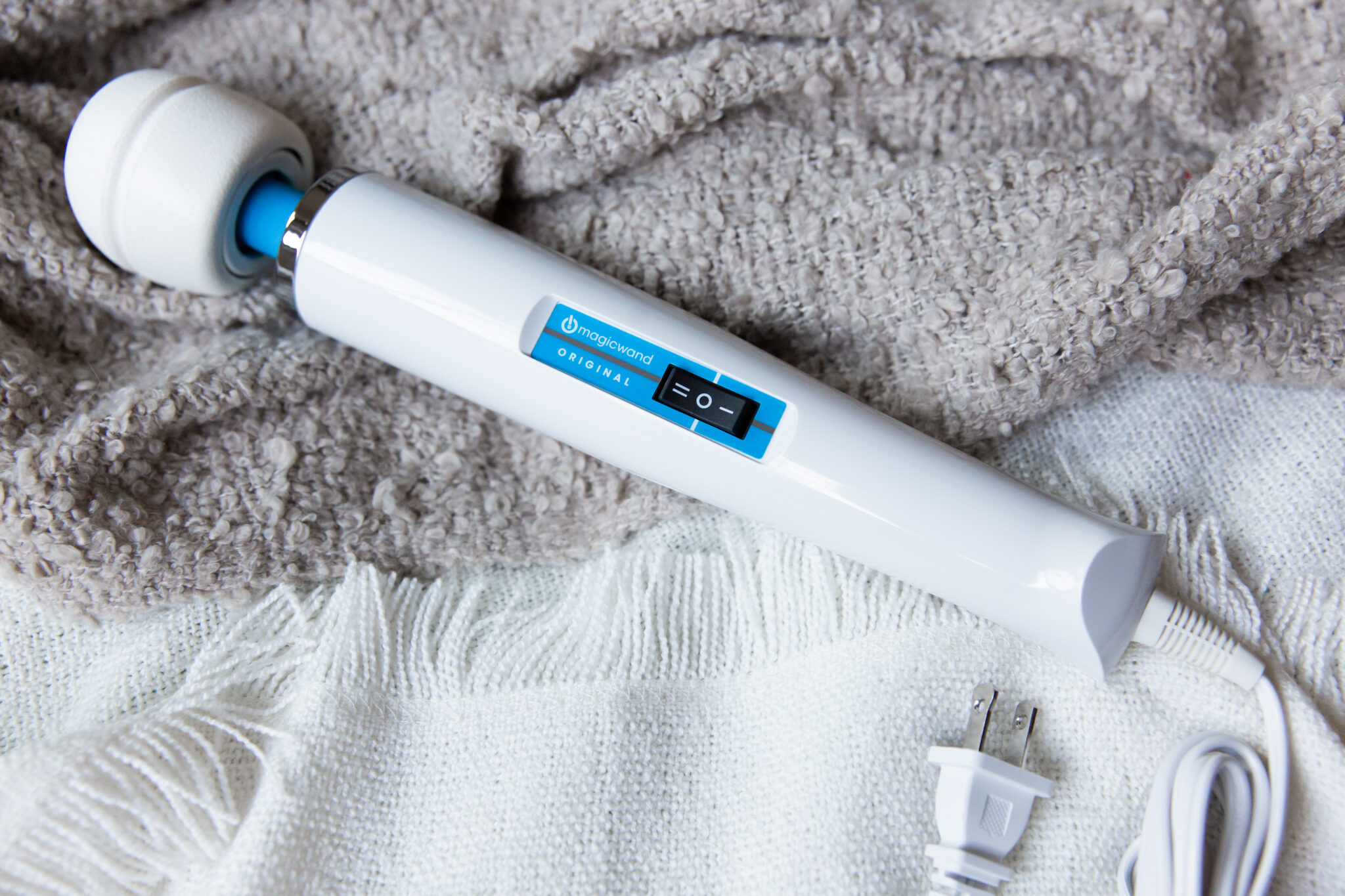 The “Magic Wands” on Amazon are significantly cheaper – for the exact reason that they are cheaper in quality, performance, speed, and power. The quality difference is noticeable. Their vibrations feel cheap and weak. It’s definitely worth the extra $10 – $20 to get the real thing, and to have the 1-year warranty in case it breaks.

Of all the vibes I’ve ever tried, the Magic Wand is one that is worth every single penny—and it’s certainly not worth wasting those pennies on something that is much lower quality.

Free shipping on orders over $69.
Pair it with our favorite lubricant, Wicked.

If you like our site, posts, and reviews
please click our affiliate links before you purchase!
This way, a small percentage of your sale comes back to us, at no cost to you.