Latex allergies can present a few challenges when it comes to safer sex, but nothing the informed Slutty Girl can’t easily overcome.  (Unless you have a latex fetish – then you may be out of luck!) If your allergy to latex is severe, you’re probably already a pro at what is safe to use and what should be avoided. For those with milder reactions though, it’s often the case that you use latex anyway, not even realizing that it is causing a reaction. On the few occasions that I’ve accidentally worn latex gloves, I’ve gotten a rash-like skin reaction, but that’s more than I’d ever be willing to risk in my vagina! For folks with a more severe allergy, even accidental contact with latex can be life-threatening.

Keep in mind that non-barrier methods of birth control almost never contain latex. To learn more about these options, check out our Birth Control 101 series. For those in a monogamous relationship, these options may be enough for you to feel comfortable. However, if you have multiple partners, are with a new partner, or are just looking for some added protection – it’s always a good idea to use a condom. Remember, only condoms can offer protection against STIs. Here’s a look at what condom options are currently available on the market for those with latex allergies or sensitivities.

You’ll want to keep a few things in mind when considering polyurethane condoms. They are often marketed as having a more lifelike sensation when worn because they easily transmit body heat between partners. But unfortunately, polyurethane is a plastic rather than a rubber, so these condoms may make noise when in use – a soft crinkly noise similar to that of a plastic bag being shaken (but a lot quieter!). It is also a bit more brittle than a rubber, so if the condom accidentally breaks, it’s likely to be a large break rather than a small tear.

Trojan BareSkin condoms are made from polyurethane. Get them at Adam & Eve! 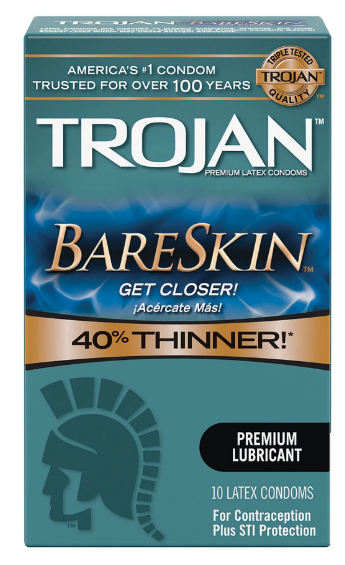 Nitrile is used only for internal condoms, and provides protection against both pregnancy and STIs. They are sold lubricated, however, additional lubrication is recommended for ease of insertion. This material is a synthetic rubber, and is also used in many latex-free rubber gloves.

Because nitrile is only used for internal condoms, the price is slightly higher than external, also referred to as male, condoms when purchased at a store, but you can buy them online for less. In recent years, manufacturers have been switching over from the use of polyurethane to nitrile for internal condoms as it is less expensive to produce. This type of condom is also less likely to make a distracting noise like its polyurethane counterpart. They can be inserted a few hours before having sex, if you desire, and are safe to keep in place even when your partner’s penis is flaccid (like after they ejaculate). Nitrile internal condoms are available at your nearest sexual health center or Planned Parenthood. (It’s important to note that internal condoms are referred to as female condoms on some packaging. Anyone with a vagina can wear them.)

FC2 Female Contraceptive Condoms are made from nitrile. Get them on Amazon! 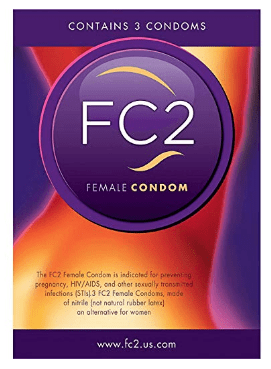 Polyisoprene is used only for internal condoms, and provides protection against both pregnancy and STIs. Currently, only Lifestyles and Durex manufacture polyisoprene condoms. (I live in Canada, so if this isn’t true in your country, be sure to share the love and tell us in the comments what other options exist!) Polyisoprene is a relatively new alternative to latex. It is a very thin rubber made by processing natural latex in such a way that the allergens are removed. As a result, some individuals may still be allergic to polyisoprene, but such an allergy is rare.

Polyisoprene condoms are available in both regular and large sizes and are always sold lubricated. Skyn even makes a flavored option! Once again, this type of condom is often marketed as feeling more comfortable and transfers body heat well. This type of condom costs slightly more than latex condoms, as the process to produce them is quite expensive. However, the price difference is nothing too crazy, usually only a few dollars more per box. Polyisoprene condoms may not be available at your nearest sexual health center or Planned Parenthood (it’s worth asking though!). But you can always easily buy non-latex condoms at Condomania!

Get Lifestyles Skyn Orignal polyisoprene condoms at Condomania! Check out our review, too! 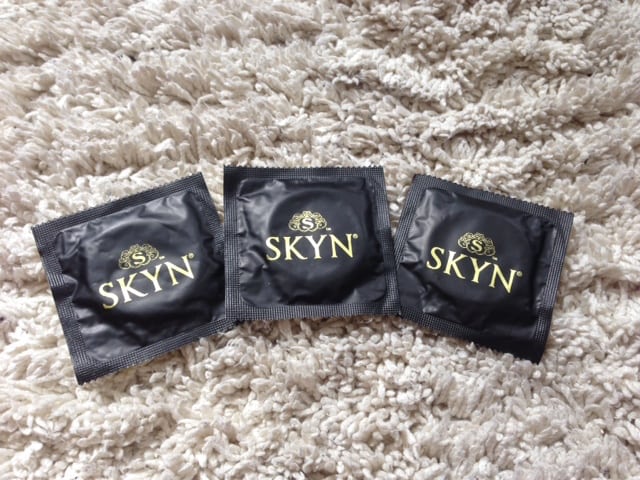 Lambskin is only used for internal condoms and are always sold lubricated. Because these condoms are made from animal tissue (intestines), which are porous, they DO NOT protect against STIs, but do protect against pregnancy. They’re not recommended for oral sex. Although lambskin condoms are the oldest type of condom in the world, they are currently only manufactured by Trojan (under the name Naturalamb). They are known for being extremely comfortable but have a slight odor to them, which may take some getting used to.

This type of condom can be a good fit for anyone but is often recommended for men with larger penises. Lambskin condoms are quite expensive and can cost up to twice as much as regular latex condoms. They can be found easily online and in some stores. Unlike other condoms they are 100% biodegradable, but it should go without saying that lambskin condoms are not a good option if you are vegan.

Get Trojan Naturalamb condoms at Lovehoney! Check out our review, too. 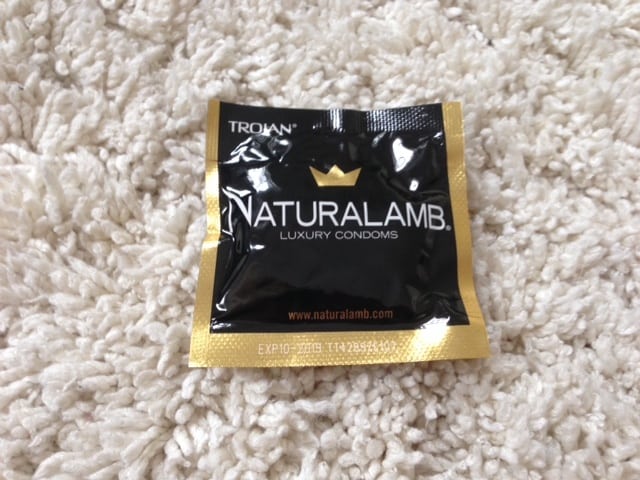 With the possible exception of lambskin condoms, these alternatives are all easy to find at drugstores, supermarkets, sexual health centers, et cetera. However, it’s a good idea to be prepared and purchase them ahead of time, because they may not be available at that 24-hour convenience store that’s the only place open during the heat of the moment! Even if you don’t have a latex allergy, it’s always a good idea to stock up on alternatives – you never know if a new partner will have an allergy. They’re also all compatible with oil-based lubes, since there is no latex to break down. Not to mention, it’s fun to try new things! 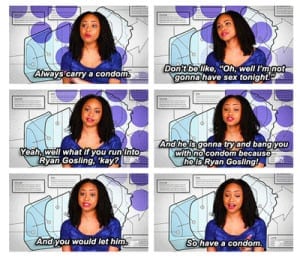