What to Do When Your Ex Wants You Back

For my girls with THAT kind of ex boyfriend…

We all have that fucker of an ex in our lives. Maybe you were crazy about him. Maybe you even wanted to be with him forever. You did everything for him; made him breakfast at 8am (at his house), shaved every inch of your body (even your butt) so you were always ready to go, paid for outings, dinners, and random things – you were the best girlfriend ever. 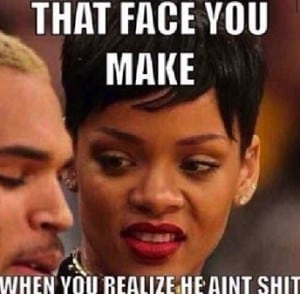 Of course you know all this because you hacked into his email and web history… but that aside;

You break up. You mourn. You go through the 5 stages of grieving a break-up. You finally start to let go and move on.

Should you date again?

All your friends think he’s a cunt, your co-workers think he’s a cunt, his friends think he’s a cunt, and you know he’s a cunt. But, you may be more than happy with his apology and speech. After all, you did miss him, mourn him, and long for the time that you had together. What you had together was “amazing” and “indescribable” and “you’re never going to find someone like him again”. Yeah fucking right. You better hope you don’t find someone like him again. He lies to his mother so much that you feel guilty when he tells you not to tell her. His stories change all the time. He tells you one thing then says the other. “I didn’t say that!” OH YES YOU DID YOU LYING CHEATING PIECE OF SHIT. Stay off that drama train, girl. 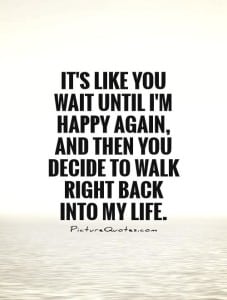 Should you have sex?

If you’re thinking that you and him may be able to have a casual, “no strings attached”, friends with benefits thing – check yourself. It feels amazing at first because he knows just how you like it, you have absolutely no inhibitions, and he’s still just as hot between your thighs as he was before. Then you realise you have feelings for this twat, and you get sucked in again. If he brings up being together again, you might weak at the knees – but trust me and everyone else around you. You will be so drained from him like he’s a life sucking sponge. You know what will happen…

Can you be friends?

At this point, you either call the whole thing off, or you fall for his pathetic persona and shit personality, AGAIN. But, if you’re stuck somewhere in limbo, you may think that being friends with your ex is a possibility. And hell, maybe it is. Some people can make that work… but most of the time, bitch – run.

“I’m sorry (I’m not sorry), but I don’t want anything to do with you anymore.” It’s really as easy as that. Just having time alone can make you realize how blind you were to all the signs that he was a shitty person – or at the very least, a shitty boyfriend and friend to you. He may have shown you a lying, cheating, hiding, manipulative side. He may have been angry and abusive. Whatever issues he had, trust me, he still has them. He still thinks he’s God’s gift to women. He’s still a player. He’s still a pathological liar. Don’t believe all the bullshit that comes out of his mouth. 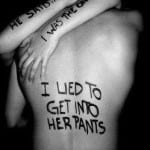 Right now, you need to focus on getting him out of your life, honey. You may to find someone else, if for no other reason than to take your mind off this asshole and occupy your time with someone new. You know you’re still worthy of love and affection. Have someone in your life to prove it to you! Find someone who will buy you nice food, some fro-yo, everything on your Amazon wish list. Someone who will spike your coffee with Baileys in the morning, and actually go down on you without complaining or you asking. Is that too much to ask for one pathetic man? No. You will find him.

In the meantime, get Tinder or join Seeking Arrangement or Established Men for the ultimate Sugardaddy. You finally won’t get random messages from random girls who slept with you boyfriend and thought you should know. Liberating!

Things one sexy beast may do to continue life without regretting her decision of ditching the dick:

Join Tinder. I swear – it’s a jolly good laugh I’ll have you know. Yes you get even more dicks, but then you can see that all men are the same. OR you may even find someone to take you on nice dates where all the food is free… It will either give you a little hope for the male species, or make you give up on them completely. In all honesty men are absolute animals: I really don’t know why we aren’t farming men to slaughter and eat because I’d rather be riding a cow than any prick I see in a club.

Get a NEW hobby. Whether it’s playing an instrument, giving makeovers, playing sport, dancing, singing in the shower, knitting, volunteering or just practicing being crazy more often. Join a book club, or a film club, or write for sluttygirlproblems.com! Try anything that is new and you need to concentrate on to improve or get into it.

Hard task at hand: if possible, make friends with your eskimo sisters. You may hate them and they may have higher cheekbones or a flatter stomach, but us girls need to stick together. They may hate him just as much as you do. You can laugh about how he does really annoying things in bed, stuff that makes you cringe: maybe he was shit at talking dirty and you had to stop because you were so mortified. Having him know that the girls he slept with are a greater power than him will make him feel uneasy. Let’s be honest, wouldn’t it make you too? 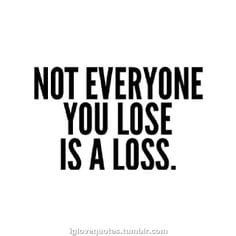 So I’m pretty sure there’s a lot more you can do to help yourself grow spiritually after a breakup, but at this moment in time, orgasms are the best thing I got.

Until next time, Slutizens! xo 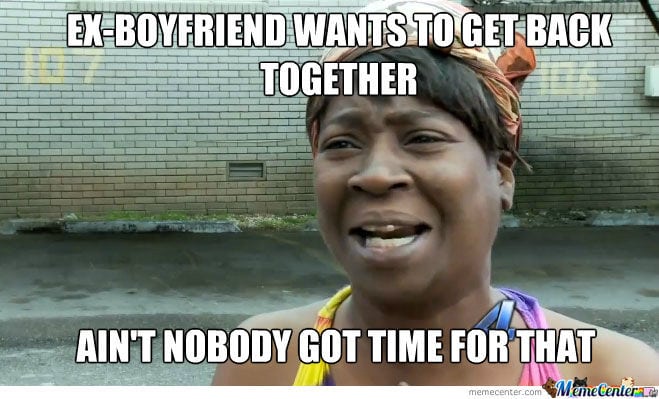